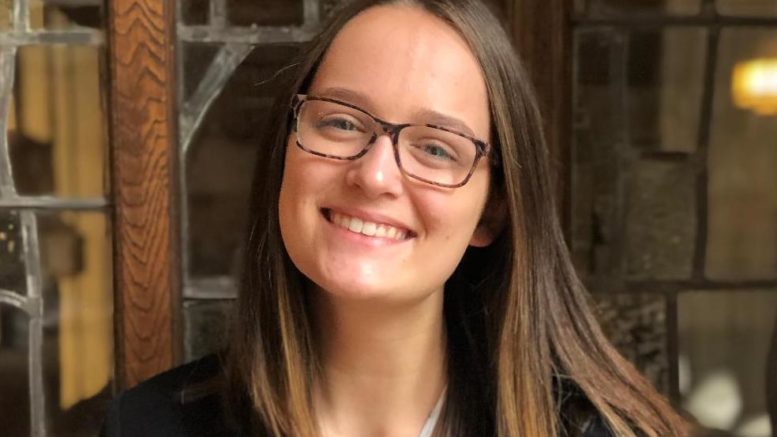 Candor High School student, Camille Brock, was elected on April 1 to be the District Governor of all of the New York State Key Club divisions. The Class of 2020 student will soon finish her junior year. Provided photo.

Candor High School student, Camille Brock, has reason to be proud of her recent accomplishment. The Class of 2020 student will soon finish her junior year, and was elected on April 1 to be the District Governor of all of the New York State Key Club divisions.

“I’m excited to lead the New York District,” Camille remarked, adding, “In my new role, I will promote Key Club across the state.”

Founded in 1925, Key Club International is the oldest service program for high school students. The student-led organization, most often referred to as simply Key Club, allows opportunities to serve, build character and develop leadership skills. With a total worldwide membership today of some 270,000, Key Club is active in 38 countries.

Debra Standinger, past Owego Kiwanis president, commented, “The Owego Kiwanis Club is extremely proud of all of Camille’s accomplishments. She is the first of our ‘Key Clubbers’ to achieve a position at the District level.”

Camille assumes the Governor position after having held the role of Lieutenant Governor for Division 20, which includes hundreds of students from Candor, Charlotte Valley, Johnson City, Laurens, Maine-Endwell, Owego, Seton Catholic and Union-Endicott.

In her role as Lieutenant Governor, Camille was involved in the Thirst Project, an initiative to provide clean water to individuals who do not have access, and helped at a road race in Binghamton, among other efforts.

A larger scale project put Camille in the spotlight, where she organized an event at SUNY-Broome last fall. She took charge of renting the facility, hosted a key speaker, planned workshops, and managed technology functions at the Key Club’s Fall Rally.

To be elected Governor, Camille ran a campaign and delivered speeches in Albany. As Governor, Camille will oversee 29 Divisions encompassing some 12,500 students in the State. She recently held her first board meeting.

Camille looks forward to traveling as Governor, and is slated to attend training in San Francisco soon, and plans to participate at a convention in Baltimore in July.

Camille explained, “When I attend the larger events, it’s then that I can network and really learn how the organization operates.”

In addition to Key Club, Camille has excelled in chorus, band and school musicals, and is also a member of a group called Amigos, where she works with mentally challenged students.

And even more, Camille works with the Candor Public Relations broadcasting club and is a member of Culture Club, and where she recently traveled to Peru during spring break.

Camille is a National Honor Society student and has been taking dual credit college courses through Tompkins Cortland Community College. After graduation next year, Camille said her options are open, yet she may consider entering the communications field. A key goal for Camille is to continue Key Club on the college level.

Camille is excited about her new role as Governor, and, among many goals in the works, will strive to, “Increase relationships within the Kiwanis family.”