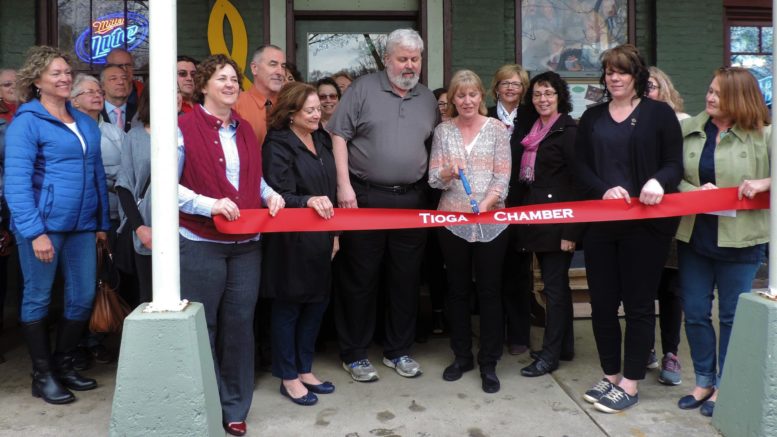 Mark and Beth Johnson, owners of Owego's Historic Parkview Hotel and Dugan House Restaurant and Irish Pub, along with the Tioga Chamber and other guests, prepare for a ribbon cutting on April 26 for the grand opening of their hotel. (Photo by JoAnn R. Walter)

Beth and Mark Johnson, owners of Owego’s Historic Parkview Hotel and Irish Pub, located at 145 Front St. in Owego, N.Y, announced the grand opening of their hotel on April 26.

At a special ribbon cutting, the Johnson’s thanked Tioga County Economic Development, Team Tioga, the Parkview staff and several trades professionals, among others, and also commented that a majority of the materials used for the renovations were from local businesses.

Mark Johnson commented, “We realize what a huge team it took to make this happen,” adding, “Beth and I are overwhelmed and very lucky to live in such a great community and thank everyone who cares so much about this beautiful, historic site.”

Known to many as simply the Parkview, the property is the oldest continually operated business in the village since 1867.

Throughout the remainder of the weekend, April 27 and 28, the Johnson’s welcome visitors during regular business hours to an Open House which will offer a chance to tour the hotel. Visitors will find that the character of the era has been meticulously duplicated in the 1900’s-themed hotel.

Look for the full story in next week’s print edition of the Owego Pennysaver Press.

Be the first to comment on "Owego’s Historic Parkview holds grand opening celebration!"