Several Tioga County veterans, families and other members of the public attended.

Pictured are the military monuments located at the Tioga County Memorial Park in Owego, N.Y. Flags flew at half-staff from sunrise to sunset on Dec. 7 in honor of those who died in the attack on Pearl Harbor. This year marks the 77th anniversary. (Photo by JoAnn R. Walter)

Raftis remarked that he shares a special “Owego-Flats” connection to Glenn A. Warner, an OFA graduate, and for whom the V.F.W. is named after.  Warner was killed in action while serving in Germany.

Raftis said, “When Glenn entered the service he surrendered his paper route to me.”

John Holton, Tioga County Veterans Service Agency director, read a proclamation from the Tioga County Legislature that stated, in part, “We are profoundly grateful for members of our nation’s military and their families, who freely risk all for the good of others.”

Governor Andrew M. Cuomo provided a press release, and it stated, in part, “In New York, we are eternally grateful to the courageous members of our Armed Forces who have put their lives on the line to defend our nation, including nearly 1.7 million New Yorkers who went on to serve in World War II in the wake of the attack on Pearl Harbor,” adding, ”In these challenging times of divisiveness and hate, we also draw inspiration from a period in history when this nation came together in the face of great adversity to fight for our shared values of democracy and freedom.”

One Tioga County serviceman at Pearl Harbor, and the county’s first casualty, was Delmar Dale Sibley. A moment of silence was offered at the ceremony in honor of Sibley who lost his life while serving aboard the USS Arizona. 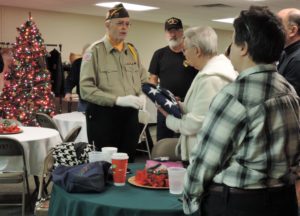 V.F.W. Post 1371 member, Dean Morgan, presents Marilyn Kennedy, the wife of Pearl Harbor survivor Bill Kennedy who passed away Feb. 26, with a flag in his memory at the Pearl Harbor Remembrance Ceremony held in Owego on Dec. 7. (Photo by JoAnn R. Walter)

Raftis called upon family members to speak about their loved ones who served at Pearl Harbor. Attending the service were family members of Richard Hopkins, Lester Dunham and Bill Kennedy.

Remembered was Berkshire resident Richard Hopkins, who was at Pearl Harbor when the planes came in and bombs were dropped. Hopkins also spent 21 days on the front lines at Guadalcanal, and from that service received the Bronze Star.

Also honored was Lester Dunham, affectionately known as Buster, who fought in five battles, which included Midway, Iwo Jima, Guadalcanal and Pearl Harbor. At Guadalcanal, Dunham escaped from a foxhole just before it blew up.

Tioga County’s remaining Pearl Harbor survivor, Bill Kennedy, who passed away on Feb. 26, 2018 at the age of 96, was stationed at Hickam Field in the Army Air Corps. The then 20-year old was asleep in his barracks when the exploding bombs first started. Kennedy braved the chaos to check on the status of planes, and also grabbed his camera at the last second, which produced many compelling images.

A fourth Tioga County serviceman, Donald Stocks, left his kitchen duty as a cook at Hickam Field to grab a rifle and start fighting. 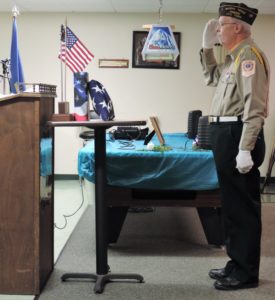 In their later years, Dunham and Kennedy shared their World War II experiences with students in the Owego-Apalachin School district.

Special guest Gordon Ichikawa, of Owego, shared the story of his late mother, Kiyo. Gordon explained that his mother was detained in two separate Japanese-American internment camps, one in California and another in Idaho, along with her parents and other family members. Gordon’s father, a Bronze Star and Purple Heart recipient, along with Kiyo’s four brothers, all enlisted in the Army and served in the European Theatre.

Gordon said that he heard no ill words from his mother about her stay at the internment camps and phrased her experience this way, “It was something that was part of her life,” adding, “She was proud to serve her country, even though she was interned.”

Danielle Ingram, Chapter 9 Veterans of Modern Warfare president and member of V.F.W. 1371 Color Guard and Ritual Team, salutes the flag prior to placing a white rose in memory of Bill Kennedy, Owego’s Pearl Harbor Survivor who passed away in February. (Photo by JoAnn R. Walter)

The ceremony concluded with a poignant military remembrance ceremony in honor of Kennedy. V.F.W. Post 1371 members each approached the podium and saluted the flag in Kennedy’s memory, and offered a wreath, a white rose and a flag. A triangular-folded U.S. flag was presented to Kennedy’s widow, Marilyn. A rifle volley was performed outside followed by the bugler call, “Taps.”

At the request of Kennedy, his ashes will be transported to Pearl Harbor.

Kennedy had shared many stories with the Owego Pennysaver, including, “When I was a ten year old boy, I watched a parade in my hometown (Huntingdon, Pa.) with Civil War soldiers marching. It is my hope that future generations will remember my generation, too.”