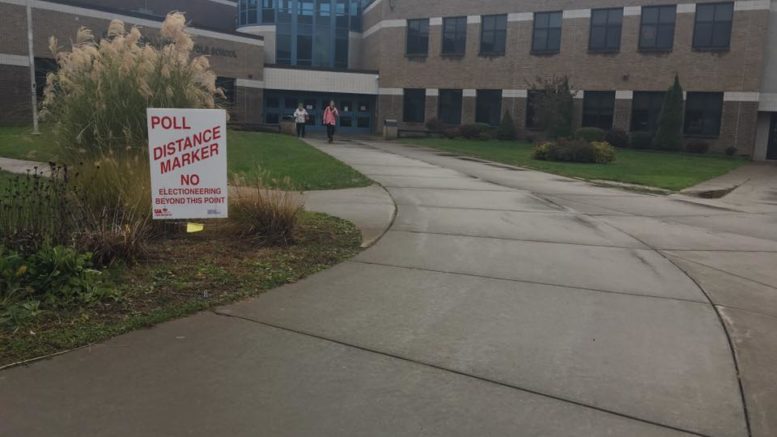 By 2 p.m. on Tuesday, poll workers in Owego reported a 28 percent turnout for voting; a number that is considered high for a mid-term election. (Photo by Wendy Post)

This week’s notebook has a variety of topics surrounding the election, and a recap of some of the results. One race that wasn’t finalized by the time of this reporting is the race for the 22nd congressional district. You can read about that a little further in my notebook.

Tuesday’s election in Tioga County, N.Y., and around the nation, saw a higher than average voter turnout. Time Magazine, and other national reports, stated that the election was shaping up to be a historic year for midterm voter turnout, with many states recording levels of voter participation not seen for a non-presidential election in decades.

The midterm elections for 2018 saw aggressively run campaigns, and a new energy among voters from all sides of the aisle.

One was painted on Oak Street, according to various reports, and another painted on a window of the Binghamton High School, and the third on the sidewalk of Main Street.

Binghamton’s Mayor, Rich David (R), made a public statement following the discovery, saying, “Hate, bigotry and anti-Semitism have no place in our community. This was a cowardly act.”

On Wednesday afternoon, Binghamton Police stated that two Binghamton residents are in custody in connection with the painting of swastikas at the city high school.

Authorities say 22-year-old William Ritchie of 88 Henry St. in Binghamton was located by detectives in the downtown area Wednesday morning. They say 17-year-old Andrew Carter – who gave no permanent address – was found a few hours later on the West Side.

And while this act is being condemned, a monthly magazine that caters to the journalism industry, Editor & Publisher, stated that these types of acts, especially on a national level, could spur voter participation, especially in urban areas.

In Tioga County, N.Y., several key races include Claudia Tenney’s contest with Anthony Brindisi, a democrat. When the polls closed, CBS News projected Brindisi as the winner of the race for New York’s 22nd Congressional District, a seat currently held by Tenney, a Republican.

Brindisi met this news with celebration, but Tenney refused to concede the race as absentee ballots could swing the race.

The boards of elections in the 22nd Congressional District have mailed at least 16,000 absentee ballots to voters. At least 11,400 had been returned by Monday afternoon. Those ballots will not be opened and counted for at least a week.

Assuming every ballot is returned, Tenney would need to win about 55 percent to take back the lead. As of this reporting, we did not have the final results for this contest, but you can follow us online at www.owegopennysaver.com or follow us on Facebook for updates when we receive them.

In another polarizing contest, incumbent Tom Reed, a Republican, took the lead over Tracy Mitrano with 55 percent of the votes.

Following her concession, Mitrano, a Democrat, thanked her supporters, but also stated that the movement for change in New York’s 23rd district is far from over.

She stated, in a release on Tuesday evening, “While I’m disappointed in the ultimate results, I am also exceedingly proud and grateful to have had the chance to run in this race,” adding, “I want to thank every single person who was a part of this movement, every single person who supported this effort over the past 16 months. We didn’t win this time, but it would be wrong to call our movement a failure. We brought an energy and a unity to this district that hasn’t been seen here for a long time.”

Likewise, in a statement from Representative Tom Reed on Tuesday evening, he stated, “We are humbled by the support we received from our hardworking neighbors across the Southern Tier, Finger Lakes and Western New York. I’m proud to have earned your trust and I look forward to continuing to work for our families.”

Also, in what Bloomberg described as an easy win, Democrat Andrew Cuomo was re-elected to another term as New York’s Governor.

The main problem for republicans, as editorialized through various news reports, is gaining traction in the city, a problem that has been an ongoing for Republicans — who haven’t won a statewide race since Pataki did in 2002.

Lt. Gov. Kathy Hochul was elected alongside Cuomo. It will be her second term as lieutenant governor.

In the 124th Assembly District, Republican Christopher Friend was re-elected for another term in a contest against Democrat Bill Batrowny.

As for voter turnout in Tioga County, poll workers at the Owego Middle School’s polling location reported 28 percent voter turnout by 2 p.m. According to Ruth Hall, who was working the polls in Owego, it was a very good turnout for a mid-term election.

By 11:29 p.m. on Tuesday, and with 100 percent of the precincts reporting, 17,121 ballots were cast in the General Election in Tioga County. This number is closely aligned with the Presidential election in 2016, where approximately 21,000 votes were rendered in Tioga County, N.Y.

To view how we voted in Tioga County during this year’s midterm election, visit www.tiogacountyny.com/media/5305/general-election-2018-unofficial-results-3.pdf.

On a side note, to the gentleman that had concern at the polling station about his ballot being rejected, and then turned over for submission, the poll workers stated that the ballot can be read from either side.

In other local news of interest last week, we reached out to find out if the owners of Two Plus Four Construction had made a decision on whether to move forward or not with the Pelly Acres project on the south side. Because the zoning change request to R3 was denied, it will cost the developers hundreds of thousands to sub-divide, which is a requirement for this type of project under the current zoning.

As of Thursday, LeeAnn Tinney, director of Economic Development, had not heard yet of any decision. We will continue to follow this story.

Also a reminder to residents that the consultant team for the Downtown Revitalization Initiative (DRI) will hold “office hours” to discuss questions about potential submissions on Wednesday, Nov. 14, from 3 to 5 p.m. at the Tioga County Office Building, 56 Main St., in the second floor conference room. Project submissions should be emailed to OwegoDRI3@gmail.com by Dec. 7, 2018.

Another session of the Local Planning Committee for the DRI is also scheduled for Wednesday, Nov. 14, from 6 to 8 p.m. at the Owego Apalachin Central School in the LGI Room at 1 Sheldon Guile Blvd. in Owego.

Wendy Post is the editor of The Owego Pennysaver Press in Owego, N.Y. and The Troy Pennysaver Plus in Troy, Pa.