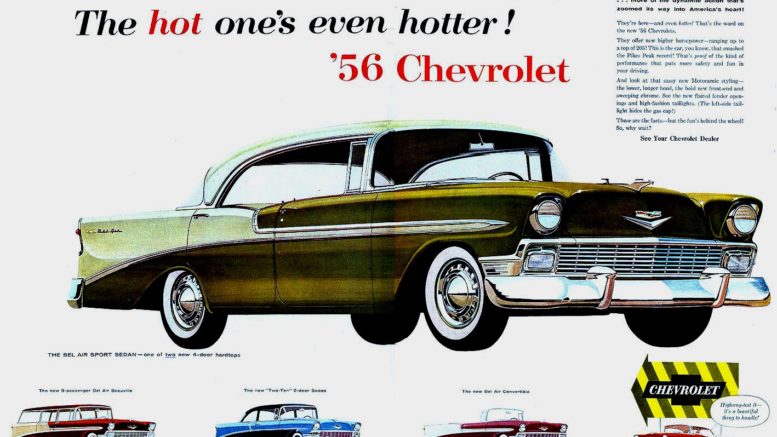 The 1956 Chevy was even more powerful than the 1955, with horsepower available up to 225 horsepower. This ad did not mention the dual-quad 225-horse engine, as this was surely an early ad for the 1956 line. Performance like this in a full size car was very impressive, and the youth market bought them up and then made them even faster. (Compliments Chevrolet)

Chevrolet made it clear through advertising like this that the 1955 Chevy was the hot one, with a new 265-inch V8 under the hood. Organized racing took hold in 1955 as manufacturers knew that “win on Sunday, sell on Monday” really worked. (Compliments Chevrolet)

Another friend who was a circle track racer had me go to an area machine shop where he did all his business. The machine shop foreman called me saying it would take a couple of weeks to get the parts, as it turns out I had one of only 400-plus Chevys that came with what was called back then the Power Pack.

The Power Pack had a Duntov cam, and different pistons amongst other performance additions. Can you shed any light on this as I’ve only found one article mentioning this motor?

Anything you can find will be appreciated. Thanks, Bob Rukke, Spokane, Washington.

A: Bob, you sure had one of the rare Chevys that came out in 1955, as it not only was the debut year of the most famous engine of all, the Chevy 265-V8, but you also got a hold of one of the performance engines that to this day is a popular discussion subject with Chevy enthusiasts.

First we’ll introduce the “Duntov” part of your engine’s equation. This camshaft is named with respect to the “Godfather of the Corvette,” Zora Arkus Duntov. I personally put the Duntov name right alongside famed General Motors designer Harley Earl as to GM’s overall success back then. 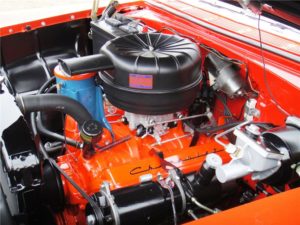 Here’s a great photo of the famous 1955 Chevrolet small-block 265 cubic inch V8, which revolutionized the way engines were built and sparked a massive aftermarket industry for high performance parts unlike no engine prior, including even the Ford Flathead V8. (Compliments Chevrolet)

These upgrades included solid-lifter high lift Duntov cams, known as a “3/4 Racing Cam” and one of which my brother and I installed back in 1966 in our ‘63 Chevy Impala 283. I also remember our engine had the Power Pack cylinder heads identified by a little pyramid on the front of the head stamping. We also removed the 3-speed manual and put a Borg Warner T-10 4-speed in with Hurst shifter and changed the rear gear from 3:36 to 3:55. We had the Power Pack heads refreshed by famed racer/mechanic/team owner of the day, namely Tony Ruberti from Vineland, N.J. When all was said and done, it was the fastest 283 Impala in the area. 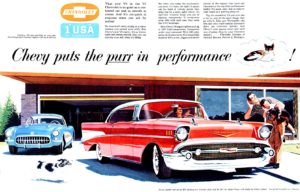 Back in 1955, the new 265 came in three configurations: 162 horsepower two barrel, a Power Pack 180-horsepower with four barrel and dual exhaust and later that year, the coveted 195-horse Super Power Pack with a solid lifter Duntov cam, higher compression pistons and a free flowing dual exhaust setup. It sounds like it was the Super Power Pack that was in your car as less than 500 were produced that year. In 1956, the ultimate Power Pack produced a conservative 225 horsepower.

The next couple of years found the 265 featuring dual four barrels, fuel injection and then growing to 283 in 1957, 327 in 1962 and then 350 by 1966 with horsepower ratings all the way up to 375 in the Corvette. And even though Chevy introduced its first big-block in 1958 ala the 348 series, it was the small block Chevy that still ruled and would be available as it is today in its modern configuration with over 700 horsepower available. I remember Chevy advertising the 1955 and 1956 Chevy Power Pack models as “The Hot Ones,” and then “The Super Hot Ones.”

Along with Duntov and Cole, co-engineer Harry Barr must also be mentioned in this article as the trio that really designed the 265-V8. The masterpiece engine was lighter than the inline Stovebolt six, featured five main bearings, aluminum pistons, individual rocker arms, forged steel crank, and a bore/stroke ratio that allowed for high revs and reliability.

The only Achilles heel of the 1955 265 was the oiling design, which did not yet have a spin on full flow filter. This was cleared up with a 1955 dealer installed option called an external oil filter and then in 1956, the oil system was revised.

Thanks for your letter, Bob, and for this trip down memory lane about the most popular V8 engine ever built.