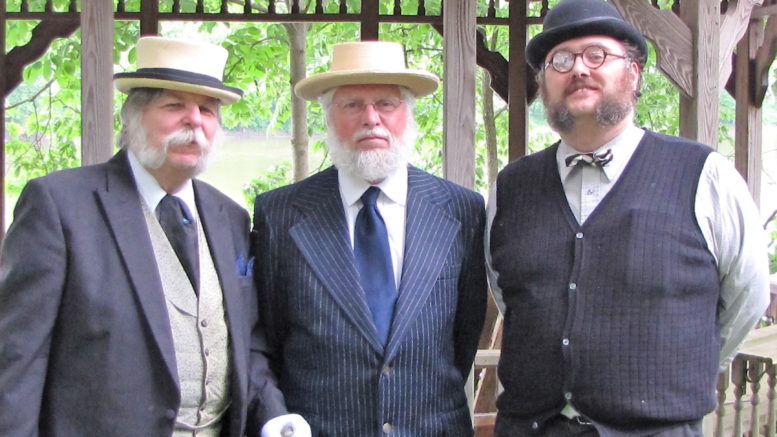 From left, Doug Weeks, Ed Nizalowski and Charles Berman portray George Westinghouse, Joseph Kemp and Ransom Olds, respectively. The troupe of seven will be at the New York Farmstead Museum from on Route 38 in Newark Valley from 2 to 4 p.m. on Sunday. (Photos by Jacob Elsbree) 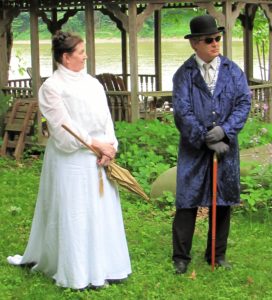 A group of seven community members have conducted countless hours of research and preparation in order to make learning history fun through an interactive improvisation reenactment hitting local museums.

The “1902 a Look at Modern America” production has been in the works for a year. Each member has conducted extensive research on his or her character in order to bring him or her to life.

Doug Weeks, who reenacts professionally, said that he focuses on developing different storylines that he could take his character on to keep the conversation moving forward.

For the presentation, all seven members take the floor and interact with each other. They bring up one another’s accomplishments while still discussing their own. This style puts an emphasis on the actors improve skills rather than going down a list of facts.

While each actor has talking points in their minds, the show is completely unscripted, allowing the audience to ask questions and feel as if they are in 1902 as well. 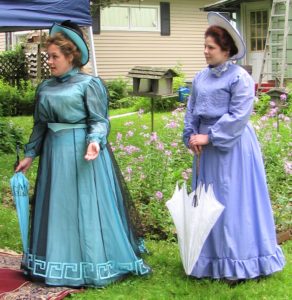 As well as putting together a character, each actor had to put together a costume. For the men, this was an easier task. The women spent anywhere from 200-300 hours sewing, stitching and embroidering their dresses, using techniques of the time. The women even have corsets under their clothing, which, when fitted correctly, should fit comfortably like a glove. Their costumes don’t even have zippers or modern buttons, Gates pointed out, but they perfected the craft of buttonholes.

The work that goes into making the costumes makes the process that much more enjoyable and the hours spent allows them to get more into character, said Gates. “Slap a corset on me, and I can become a character in a heartbeat.”

The year 1902 was chosen was because of the changes made during the progressive era. Science was changing and new sciences were emerging, such as a horseless carriage, which allows you to travel a penny a mile using gasoline. Education was also spreading, allowing more women to enroll in college.

The important thing to Weeks is having fun while in character in order to ensure that the audience is having fun.“Its about bringing the past to life, one character at a time,” he said.