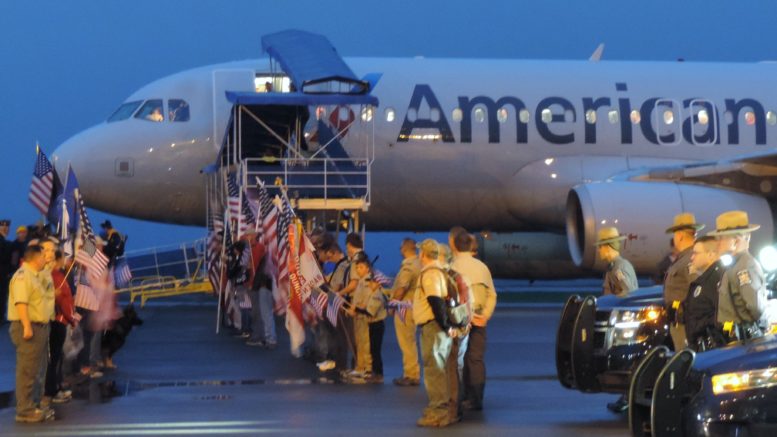 Several local veterans groups, scout troops, a canine police officer and others, gather in a reception line outside Hangar One at the Binghamton airport and prepare to greet veterans at a Homecoming ceremony on May 12. (Photo by JoAnn R. Walter) 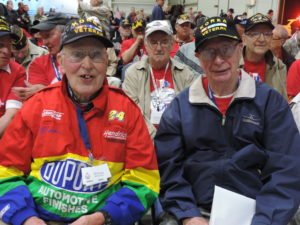 More than 60 veterans from New York’s Southern Tier, and surrounding areas, flew to Washington, D.C. on May 12 with the non-profit, Twin Tiers Honor Flight (TTHF), a part of the Honor Flight Network. The trip was free of charge for the veterans who served during World War II, the Korean War and Vietnam.

Upon arrival in Washington, TTHF “Mission 7” was greeted by the D.C. community inside the airport. Veterans were then transferred to chartered buses that transported them to multiple stops, including the World War II memorial, Korean War Memorial, Vietnam Veterans Memorial, Marine Corps War Memorial, U.S. Air Force Memorial and Arlington National Cemetery.

Waverly, N.Y. resident, Norman Westervelt, a U.S. Army Korean War era veteran, said he enjoyed the trip and actually didn’t mind the near 90-degree temperatures in D.C. that afternoon. He commented that the most memorable part of the trip, was, “Arlington National Cemetery and the Changing of the Guard, and the Korean War Memorial.” 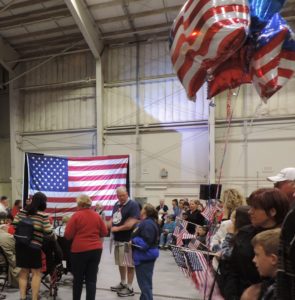 Veterans are welcomed back home by a standing room only crowd in Hangar One at the Binghamton airport on May 12. (Photo by JoAnn R. Walter)

Each veteran was accompanied by a “guardian” on the TTHP trip, and for Westervelt, his son, also named Norman, was his guardian for the day. Broome County Executive Jason Garnar served as a guardian on the trip, and also on board the flight was N.Y.S. Assemblywoman Donna Lupardo.

The Honor Flight landed shortly after 8 p.m., which delayed the Homecoming celebration by about an hour. Several veterans groups, including the V.F.W. Post 1371 from Owego, along with scout troops, a canine police officer and other groups, formed a reception line at the exit of the plane as veterans departed.

Veterans were then introduced at the entrance to the hangar where a standing room only crowd greeted them, cheering, waving American Flags, and displaying homemade signs. Inside, a ceremony for the veterans featured patriotic music, a dance number and speeches by local dignitaries. 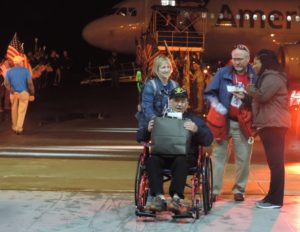 A World War II veteran, one of a few who flew on the Honor Flight to Washington D.C. on May 12, is greeted at the entrance to Hangar One at the Binghamton airport. (Photo by JoAnn R. Walter)

One of the groups in the reception line, the Defiant Brotherhood Motorcycle Club out of Candor, N.Y., a club that honors law enforcement and the military, along with other charities, had made plans to give a Spencer veteran an escort home after the ceremony along with Tioga County fire departments and two veterans groups.  However, the veteran to be honored fell ill the day before the Honor Flight and was unable to make the trip. 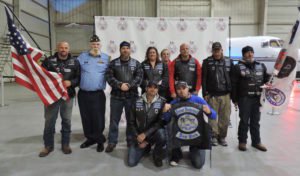 The Defiant Brotherhood Motorcycle Club, based out of Candor, N.Y., pose inside Hangar One at the Binghamton airport. The club, which honors law enforcement and the military along with other charities, were part of the reception line welcoming home veterans on May 12. (Photo by JoAnn R. Walter)

Be the first to comment on "Honor Flight takes veterans on a journey to Washington, D.C."