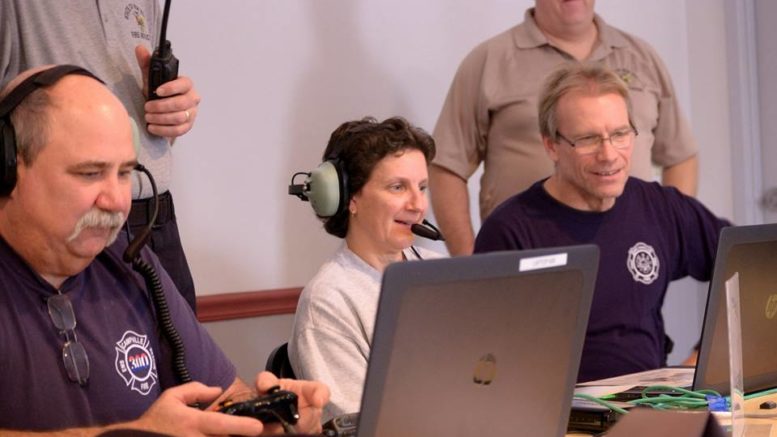 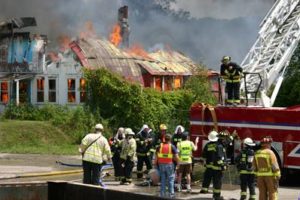 Pictured are first responders with the Campville Fire Department on the scene at a working structure fire. (Provided photo)

Proudly serving the community for 70 years, the Campville Fire Department is comprised of 100-plus volunteers, which includes firefighters, EMS, fire police and emergency support services. Campville works out of three stations; Station No. 1 located at 6153 State Route 17C, Station No. 2 at 4279 Gaskill Rd., and Station No. 3 at 1281 Route 38.

Re-elected to her second year in 2018 as Chief of the Campville Fire Department, Diana Ford served in various other officer roles and has been a department volunteer for 33 years. As Campville’s first female chief, she is proud of that accomplishment, however feels that fact shouldn’t necessarily be in the spotlight. Instead, she credits each individual member for their participation in the overall success of the department.

Ford does follow many women who have volunteered in the department’s history.

According to the department’s website, women have been members since 1958, and the first for Tioga County. Even back in those early days, it was not uncommon to find women driving the trucks to a scene or assisting in fighting fires.

A photo for the history books; pictured is the Campville Fire Station, dated 1949. (Provided photo)

Like many volunteers, Ford holds a full-time job, too. She brings to the department knowledge and experience from her 25 years as a nurse at Robert Packer Hospital.

With support from her family, she said taking on the chief role was a logical next step, however with it comes a challenging responsibility, too.

But at the end of the day, Ford said, “The reward is huge.”

The Campville Fire Department was the recipient of a substantial grant in 2017 from the Mildred Faulkner Truman Foundation. The $15,367.95 grant was used to purchase multiple items, including reflective safety vests that help firefighters and EMS be better seen at incidents, especially those involving the roadway.  n addition, carbon monoxide meters for the departments three ambulance’s EMS bags were purchased, which help detect carbon monoxide in homes that firefighters and other rescue personnel enter, and new portable radios for fire and EMS personnel were acquired, to be used for various emergency situations.

Campville was one of several fire departments and emergency service squads who received funding last October, as announced by Senator Fred Akshar, and with their $5,000 portion, purchased wireless radio equipment for two water rescue boats.

The department plans to reach out for additional grants in 2018 as well. Ford mentioned pursuing grant money for a bailout system, along with thermal imaging technology equipment.

According to the New York State Assembly website, a new law signed by Governer Cuomo and taking effective in 2019, the New York State Firefighter Gap Coverage Cancer Disabilities Benefits Act concluded via a study that firefighters are at a higher risk of certain cancer types due to occupational exposure.

Ford remarked, “Fires today burn hotter and faster, and the carcinogens coming out of structures are increasingly dangerous.”

A hot topic for fire districts across the state, how to implement the law will most likely be worked through the state’s Office of Fire Prevention and Control. The law provides volunteer firefighters who develop certain forms of cancer with a lump sum disability benefit.

The aging out of volunteers is a concern to Ford as well, and the department will continue its efforts to recruit new volunteers. Campville has paid EMS around the clock, but everyone else is a volunteer. And, similar to other fire departments in our area, members have families, jobs and other responsibilities, too, so the more volunteers on board, the better.

Ford explained that individuals don’t necessarily have to volunteer to fight fires, and commented, “There are many tasks that volunteers can help with.”

Ongoing training, both in-house and state mandated, whether it is OSHA, HazMat or other training, remains at the top of the priority list. Extreme emergency situations such as ice water rescues involve more specialized training, and in Campville, six volunteers pilot a rescue boat and are ready for flood, pond and other water-related rescues.

Regarding equipment changes, a new engine is expected in 2018 which will replace a truck that has aged out.

With high-tech capabilities available today, hearing a fire siren is almost a thing of the past. In the Campville district, you won’t hear a siren, and Ford said residents prefer it that way. Instead, a product called “I Am Responding” alerts responders to an emergency call via an App, and enables responders to know who is responding, where and when they are responding and, in turn, up-to-the-minute information is posted, even on a screen at the station.

For additional information or to inquire about volunteering, contact the Campville Fire Department at (607) 748-9315 or visit their website, campvillefd.com.