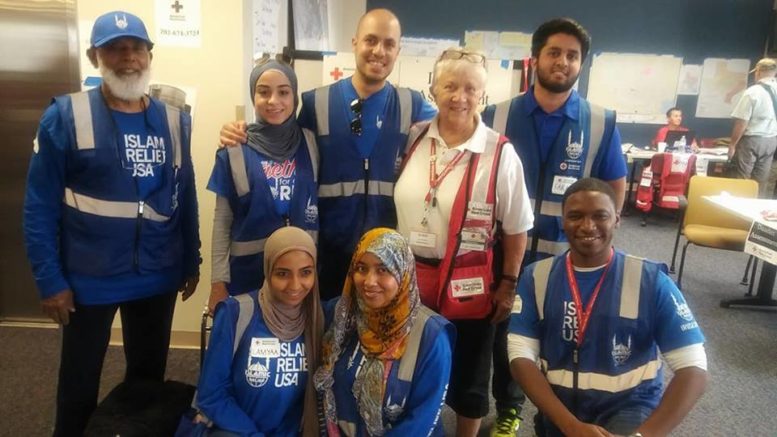 Pictured is Apalachin resident Lee Campfield, along with a group of volunteers from the organization - Islamic Relief USA. 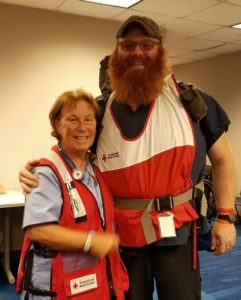 Pictured, on the left, is Owego resident Sandy Smith, a retired nurse and Red Cross volunteer who helped in Houston after Hurricane Harvey devastated the area. Red Cross volunteers traveled to Houston from all corners of the U.S. (Provided Photos)

For Lee Campfield of Apalachin, a veteran Red Cross volunteer for 20 years, her plane was one of the last to land before Hurricane Harvey hit Texas on Aug. 25.

“It rained like I had never seen before,” Campfield said.

And Campfield has seen plenty of rain and flooding in her time with the Red Cross. Originally from Knoxville, Tennessee, Campfield has lived in the southern tier for decades and was a Red Cross volunteer during the floods of 2006 and 2011.

Campfield deployed to work in Texas for two weeks, an assignment which entailed 12-hour workdays. Her role was as a coordinator for ERV’s, or emergency response vehicles, is basically a huge feeder operation that quickly distributes food, water and other supplies utilizing high-tech trucks that deliver to affected communities.

“There were 185 ERV’s reaching thirteen kitchens,” Campfield said, whose job was to inspect the ERV’s and ensure each kitchen had what they needed,” adding, “Meals were served to nearly 5,000 people in one sitting.”

Campfield explained that the Harvey disaster was different than what she has experienced before. “The Houston area is flat and the water just stays, it has no place to go,” she said. 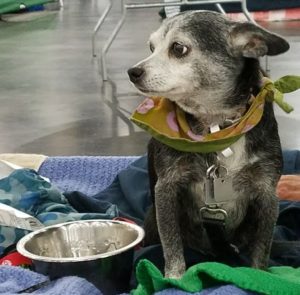 Pictured is Queenie, a mascot at the Houston convention center shelter where Sandy Smith, a retired nurse and Red Cross volunteer, helped people for two weeks.

Campfield continued, “People come together to help one another and they are selfless in their own way. I saw it with people after 9/11, and it was the same in Texas; people just go out of their way.”

Campfield has completed 50 volunteer missions with the Red Cross since 1997 and averages about two to three trips each year, which included other disasters such as 9/11 and Hurricane Katrina.

About her two-week Texas run, Campfield said, “It was fulfilling.”

Campfield started volunteering with the Red Cross after she retired from her school teaching career. She didn’t mention stopping anytime soon.

For Owego resident Sandy Smith, a retired nurse who has been sent on Red Cross assignments for five years, Texas was a significant challenge as compared to others. During Sandy, Smith was staged as a virtual nurse on the phone in upstate while helping others affected downstate. In 2016 during Matthew, Smith was on duty helping 200 people at a shelter versus the thousands she saw in Houston.

“In Houston, I helped in one of the mega shelters,” Smith said, adding, “It was a six-block convention center that took in ten thousand people.”

The convention center, she said, was a whole new ball game, and all hands were on deck. 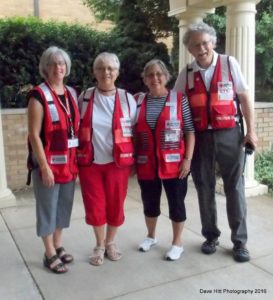 Pictured, second from left, is Apalachin resident Lee Campfield, who has been a Red Cross volunteer for 20 years.

“It was pretty impressive to me, I was amazed. The Red Cross really knows how to organize,” Smith said, and further explained that the quick action by the Red Cross to help re-establish everyone’s daily living needs, including acquiring medications, wheelchairs, oxygen and countless other critical health items, was exceptional.

Smith explained that the Red Cross was pre-positioned prior to Harvey hitting Texas.

Chartered in to the field were doctors of all specialties, pharmacists, veterinarians, social security and veterans representatives, along with numerous other agencies, and nurses like her coming in from all corners of the U.S.

Interestingly, one key item that helped Smith tremendously is a Language App that she had installed on her phone. She explained, “When I was helping people with their health needs, nearly every known language was being spoken in that convention center.”

Smith also commented that she feels the public has a misconception about the work performed and donations received by the Red Cross. Citing negative feedback on social media, Smith would like others to know that the Red Cross is 93 percent volunteer-based.

According to charitynavigator.org, the percentage of the Red Cross’ total expenses spent on the programs and services they deliver is 90 percent. For Hurricane Harvey, the Red Cross has communicated via their website that 91 cents of every dollar for the disaster has gone directly to help the people.

As a volunteer with boots on the ground in Houston, it is Smith’s opinion that there aren’t any other organizations in the U.S. who could have staged emergency help as quickly as the Red Cross accomplished, particularly their action in getting the convention center up and running within 24 hours.

Smith first got her feet wet following the flood of 2011 and has been active ever since. She also gets involved with teaching adults and children emergency preparedness, such as the youth-based Pillowcase Project.

“I love it,” Smith said, adding, “If you’re not part of the solution than you are part of the problem.”

Smith’s reaction to the negative feedback is, “Please step up and volunteer.”

“Smith shared that in Tioga County there are just four individuals who are volunteers ready to respond to emergency situations, along with a few dozen from the southern tier.” According to the Red Cross, the organization responds to nearly 64,000 disasters a year nationwide.