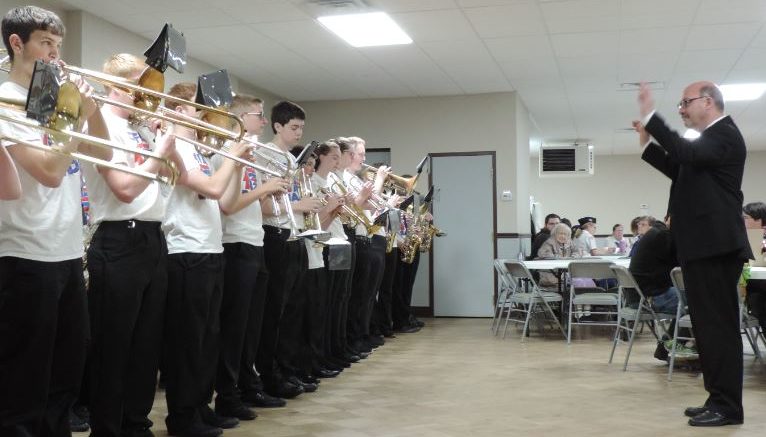 The Owego Free Academy parade band, under the direction of Daniel Fabricius, performs patriotic music for guests attending the Memorial Day Remembrance Service on May 29 at VFW Post 1371 in Owego, N.Y. (Photos by JoAnn W. Walter) 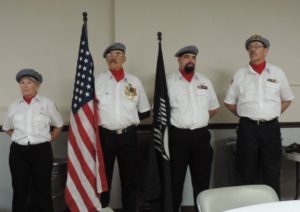 Members of the Veterans of Modern Warfare participate in the Memorial Day Remembrance Service on May 29 at the VFW, Owego, N.Y. (Photo by JoAnn W. Walter)

The V.F.W. in Owego, located at 207 Main St., was filled with veterans and guests on Memorial Day for the annual remembrance service.  Due to rain, the traditional Memorial Day parade was canceled.

V.F.W. Post 1371 of Owego presented and posted the colors, which was followed by the National Anthem played by the Owego Free Academy parade band. 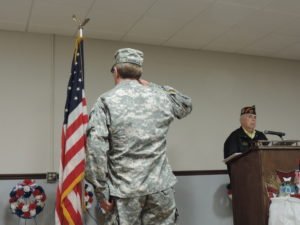 A veteran salutes the U.S. Flag during the Memorial Day Remembrance Service on May 29 at the VFW, Owego, N.Y. (Photo by JoAnn W. Walter)

Owego elementary students presented U.S. Flags to honor the memory of fallen heroes. The flags were set-aside in a patriotic basket with plans to place them at the Tioga County Veterans Memorial.

A standing ovation was given as Bill Kennedy, World War II veteran and Pearl Harbor survivor, arrived for the service.

The Owego Free Academy (OFA) parade band played a medley of five armed services songs in a salute to America’s finest, and Raftis asked veterans present to stand as their song was played. 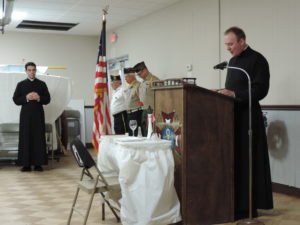 Barbara Bilbrey, Gold Star Mother of Iraq fallen hero, SPC Charles Bilbrey, Jr., spoke of her son’s recent induction into the 2017 New York State Senate Veterans Hall of Fame, and shared, “We are honored beyond words and cannot thank Senator Akshar enough. This is our tenth year without Charlie and my job is to make sure that he and others are not forgotten.”

Keynote speaker, OFA band director Dan Fabricius, who has led the OFA parade band for 28 years and will retire at the end of the school year, expressed his gratitude to the community. Fabricius said, “I’m grateful for teaching in Owego; and to the community, thanks for teaching this teacher the importance of Memorial Day.”

Owego resident Gaye Sautro brought the World War II historic marker that honors Margaret J. Hastings, and the only marker in New York State that honors a female veteran, which was recently vandalized and stolen from her McMaster Street home. Sautro thanked the public for sharing the story via social media, which helped recover the marker quickly. 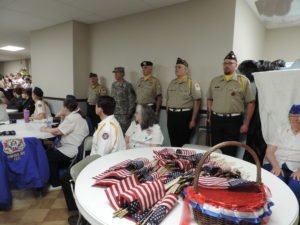 Owego Elementary students presented U.S. Flags in memory of fallen heroes. Following the tribute, a table remained filled with the Flags, which were to be delivered to the Memorial later in the day. (Photo by JoAnn W. Walter)

Raftis acknowledged Erwin Flohr of the Netherlands who visits multiple cemeteries in the Netherlands and Belgium to honor WWII Tioga County fallen heroes. Owego residents, John and Carol Schubert, will deliver a proclamation to Flohr from Senator Fred Akshar and Tioga County when they visit World War II sites in June.

At the conclusion of the ceremony, “Taps” was played by an OFA bugler inside the VFW Hall, and a rifle salute by VFW Post 1371 was delivered outside.  VFW Post 1371 members and guests walked from the VFW to the Court Street Bridge, and in honor of U.S. Navy fallen heroes, released a wreath into the Susquehanna River. 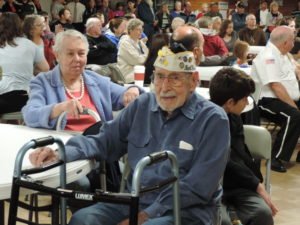 Owego’s own Bill Kennedy, who is a WWII veteran and Pearl Harbor survivor, attended the Memorial Day Remembrance Service on May 29 at the VFW, Owego, N.Y. (Photo by JoAnn W. Walter)

Raftis acknowledged veterans present from VFW Post 1371 and the Men’s and Ladies Auxiliary Units, Chapter 480 Vietnam Veterans of America, the Tioga County Marine Corps League, Tioga Post 401 American Legion members and auxiliary, the Veterans of Modern War, among others. Raftis also acknowledged the efforts of Chapter 480 Vietnam Veterans for cleaning the memorials prior to Memorial Day.

The roll call of honored names of Tioga County veterans took place as usual prior to the beginning of the remembrance service, and during the ceremony, Raftis read a roll call of deceased veterans since Veterans Day.

Pictured is Daniel Fabricius, director of bands at OA Schools, who was keynote speaker at the Memorial Day Remembrance Service. (Photo by JoAnn W. Walter)

Be the first to comment on "Updated: Memorial Day remembrance service highlights; parade canceled due to rain"