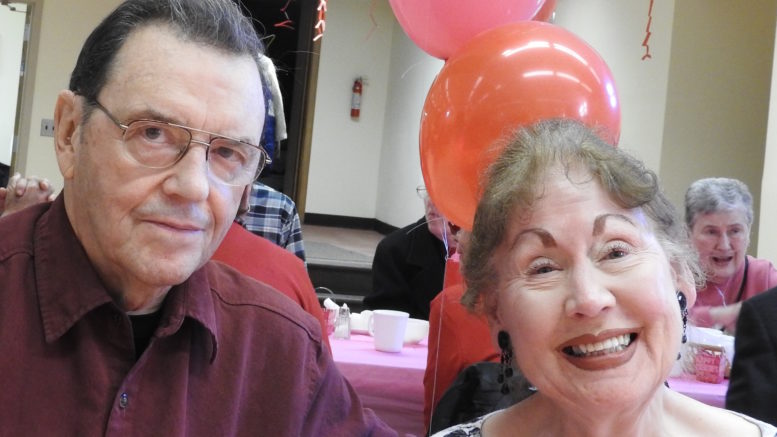 Pictured, are Ron and Brenda Dougherty, who have been married for 66 years, have 11 children and 29 grandchildren. They attended the Anniversary Mass and Sweetheart Luncheon at St. Patrick’s Church in Owego on Tuesday. (Photos by Wendy Post) 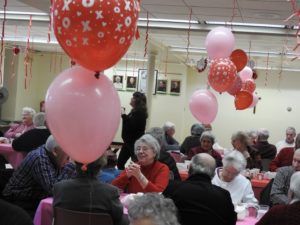 Guests that have been married longer than 50 years enjoyed the Anniversary Mass and Sweetheart Luncheon at St. Patrick’s Church in Owego on Tuesday.

On Valentine’s Day, also known as St. Valentine’s Day and celebrated yearly on Feb. 14, approximately 40 couples that have been married for 50 years or more arrived at St. Patrick’s Church Hall in Owego to celebrate their love.

The event, dubbed the Anniversary Mass and Sweetheart Luncheon, welcomed the couples for a morning of prayer and fellowship. Lisa Salamida, administrative assistant at St. Patrick’s, stated that the event is intended to honor the couples that attend.

Father Van Lieshout, who has served for one year with St. Patrick’s and Blessed Trinity, conducted the mass, and then a luncheon that followed was served by three home-schooled families from Newark Valley – the Gillio’s, Durand’s, and the Clark family. 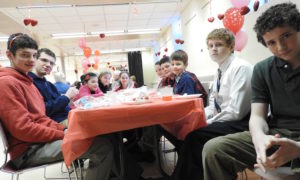 Home-schooled students from the Gillio, Durand, and the Clark family in Newark Valley served lunch on Valentine’s Day to couples who have been married longer than 50 years.

When asked why they participated in the event, home-schooled student Gabriel Clark replied, “It’s fun to meet everyone, and it’s a good witness to what marriage should be.”

As for the couples in attendance, Jim Raftis, Sr., who attended with his wife Virginia, estimated that there were approximately 2,000 years of marriage in the fellowship hall.

Raftis and his wife have been married for 54 years; and according to Virginia Raftis, their marriage has been kept together because of their faith.

Ron and Brenda Dougherty, who were also in attendance, earned recognition for being married for the longest period of time – a total of 66 years. According to Ron, when you get married, that’s it!

Ron explained that his wife, Brenda, has always been there and has always taken care of things.

“When you get a keeper, you keep her,” exclaimed Ron.

The couple was also recognized for having the most children, 11 to be exact, and the most grandchildren – 29.

The church has held the Valentine’s Day event for over two decades, and it is just one of the many events hosted by the church.

On Feb. 25, beginning at noon, St. Patrick’s will host their annual Jack Frost Barbecue; an event that has been taking place for 25 years.

David Franz started the annual barbecue, and continues to be involved.

Franz explained that the first year the barbecue was held it was 20 degrees below zero, and they did 200 chicken halves that were sold out in 40 minutes.

“We knew we had something here,” said Franz of that first barbecue.

As for the volunteers, they fire up the grills at 5 a.m., and plan to continue that tradition on Feb. 25, at St. Patrick’s Church in Owego.

1 Comment on "Love was in the air on Tuesday!"