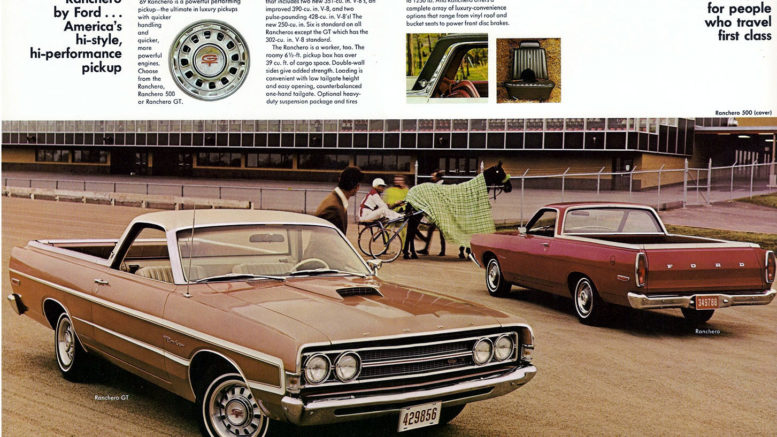 The 1969 Ford Ranchero came in a GT trim with an available 428 cubic-inch V8 Cobra Jet engine, the same that powered the famous 1968 Mustang Cobra Jets. Extremely rare today, a vehicle like this will fetch top dollar at the nation’s auto auctions.  (Compliments Ford Motor Company).

This 1970 El Camino SS is one of the most collectible when powered by the 454-inch V8 engine. Even with the smaller 396 V8, these El Caminos are top dollar traders in the collector car hobby. The SS454 was not yet mentioned in this ad, but was available.  (Compliments General Motors).

Q: Greg, I know you race Chevy cars and also own a nice MOPAR, too. But I feel you will be 100-percent fair when I ask if you feel the Ford Ranchero had it all over the Chevy El Camino? I’m a lifelong Ford fan now in my retirement years and would like to hear your thoughts on the Ranchero versus the El Camino. Thanks very much and I really enjoy your stories about the old cars. Francie H., Elysburg, Pa.

A: Francie, here’s my initial answer: Yes, the Ford Ranchero, as you say, “Has it all over the Chevy El Camino,” and in my opinion for several reasons.

First, the Ford Ranchero debuted in 1957 and never looked back, all the way through its final 1979 production year. Not only did Ranchero precede Chevy’s 1959 El Camino effort by two full years, Ford’s idea was an immediate hit with those who loved cars and trucks but didn’t have anything “in the middle” to choose from. 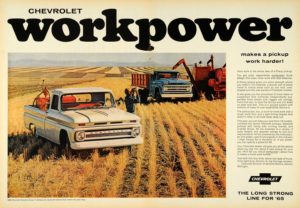 So back in 1957 Ford took its full size Ford Station wagon chassis and put a car front end on it along with a pickup truck bed that could carry about 850 lbs. of cargo.

We also have to remember that back in that era pickup trucks were a far cry from what they are today. Specifically most were what we called “farm trucks” or “work trucks” which meant they didn’t have any amenities to help make driving them as an everyday family or personal vehicle much fun. So, Ford was correct in its theory that a “half car-half truck” would be a popular consumer option.

Now here’s why I give Ford the edge in an El Camino “which one was better” comparison. Not only did Ford create the Ranchero first, it released Rancheros throughout its car line to include the compact Falcon, intermediate Fairlane and also the full-size line, too. At the end of the sixth generation run in 1979, over half a million Rancheros had been sold and today these Rancheros attract lots of attention at car shows across the nation. Chevy never released the El Camino in compact or full-size other than its first two years of 1959 and 1960. (Corvair lovers take note. I don’t equate the Corvair truck to a Falcon Ranchero by any means).

As to why Ford stopped Ranchero production perhaps lies in the fact that baby boomers were growing in numbers and needed more room than the Ranchero offered. Also, if you remember back in 1983, Ford decided it was time to introduce a Ford Ranger compact pickup it was working on since 1979 in hopes that it would serve the purpose of those who loved the Ranchero. Additionally, even though a 1983 Ford Ranger pickup was light years away from today’s spectacular Ford F150 pickups that ride and are equipped like a Lincoln and can do the work of a beast, the Ranger offered several driver/passenger amenities that would keep Ranchero fans happy and fill the need as an everyday driver.

As for El Camino, don’t get the idea I’m down on these car-truck beauties. I clearly remember immediately running to my favorite hobby shop and buying the first AMT 1/24 model kit of a 1959 El Camino, which came with Texaco gas station decals. Unlike Ford, which continued production through 1979, Chevy did not make an El Camino in 1961 to 1963 as sales of the 1960 models weren’t good and trailed Ranchero sales, 21,000 to 14,000. Surprisingly and with some irony, the 1959 El Camino outsold 1959 Ranchero by about the same number! So because Chevy took three years off, I give another vote to Ranchero.

Chevrolet then re-introduced the El Camino in 1964 based on the intermediate Chevelle line and in keeping with Ford’s Fairlane based Ranchero. Thanks to the high performance crowd, a 1966 to 1970 SS396 El Camino is today a very popular muscle car/truck, and like the Cobra Jet Ranchero, these Chevelle-based El Caminos are a big hit at the car shows and area drag strips. My favorite? I’ll take a 1970 El Camino SS454 (or an SS 396 will do fine, too).

I will give the Chevy one major pat on the back as it did outlast the Ranchero by quite a few years, namely lasting through 1987 and six generations.  This means that there are more El Caminos on the road today than Rancheros, which then gives a collectability nod to Ford. (Phew! These Ford versus Chevy columns are tough).

So there you have it Francie, the Ford Ranchero versus the Chevy El Camino. Both are great, but Ford receives my vote for initial ingenuity and being the scarcer collector vehicle.  And don’t forget I own a 1959 Edsel Ranger, too!

(Greg Zyla is a syndicated auto columnist who welcomes reader input and questions at 303 Roosevelt St., Sayre, Pa. 18840 or email him at greg@gregzyla.com)