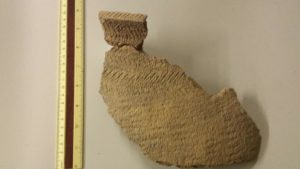 Early this summer, the Susquehanna River Archaeological Center (SRAC) in Waverly, N.Y. began excavating a local Native American site that is on the verge of being erased by the plow and impacted by modern land use.

Lead by archaeologist Dan Caister and anthropologist Dr. DeeAnne Wymer, their excavations have revealed that the site is over 1,000 years old and may be the remains of an ancient village – most importantly the research is yielding important information concerning the ancient people who once lived in our locality.

It is SRAC’s hope to collect whatever data is still available before it is gone forever. As a result, in conjunction with the artifacts that are being found, real research concerning these ancient remains as they relate to our prehistoric past is underway with research such as botanical studies and c14 and AMS dating.

The results will be revealed at the Center’s upcoming annual event, Drumbeats Through Time on Saturday Oct. 15. The event is kicked off every year with an exclusive membership luncheon that ends at 1 p.m. The event is open for the public to attend for free the rest of the day, which will be filled with great presentations, music and Native American dances. 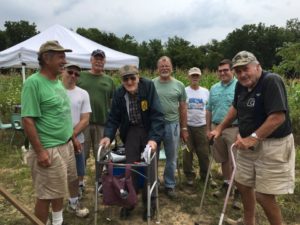 This year, at 1 p.m., a special exhibit on the 2016 excavation will be unveiled and SRAC’s Dr. Wymer and Dan Caister will present their work and findings on the site to date while explaining artifacts and ceramics discovered. SRAC’s Deb Twigg will present the 100th Anniversary of the 1916 Susquehanna River Expedition at 2 p.m. At 3 p.m., Seneca representative Dick Kane will present Native American Pipes and discuss their usage in the Native American cultures.

The event closes with the national award winning Seneca Buffalo Creek Dancers who will share their cultural drumming and dancing with the audience.

SRAC’s cofounder and executive director, Deb Twigg, added, “Drumbeats Through Time is an event dedicated to our Native American past, present and future. We are proud to bring this free event to the public every year and to have our friends from the Seneca Nation share their culture with us. It’s a great day of friendship and goodwill. I hope you will come out and support our efforts in the community.”

Be the first to comment on "SRAC to present Drumbeats Through Time; Unveil artifacts"