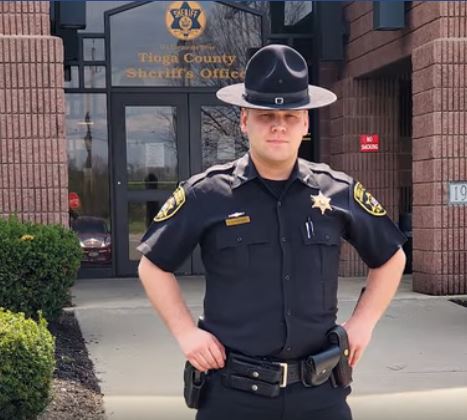 Deputy Thomas Gallagher, a member of the Tioga County SWAT team, is a recipient of the 2020 Southern Tier Real Heroes Law Enforcement Award.

Via redcross.org, the organization stated, “Every now and then an unselfish action on behalf of a neighbor, a co-worker or even a stranger can change another person’s destiny and, at the same time our own,” adding, “And in that moment, real people become real heroes.”

The Red Cross shared, “Deputy Gallagher was on the Tioga County SWAT team who responded to an incident of a distraught individual with a gun. Deputy Gallagher negotiated with the man who relinquished the firearm and surrendered.”

Via a video that the Red Cross shared, Deputy Gallagher described the incident.

Gallagher remarked, “Myself and another officer got a call to a suspicious vehicle at a residence. Upon arriving at said residence, we witnessed two suspects running from the rear of the residence in different directions.”

Deputy Gallagher continued, “We were able to apprehend one of the suspects, and during that time she divulged that there was a third party still in the house.”

The deputies then set up the perimeter. At one point, the third party suspect showed himself in a window with a gun to his head. Deputy Gallagher explained that the situation was able to be deescalated, and, in turn, went into negotiation.

After upwards of one hour, Deputy Gallagher was able to get close enough to the residence to talk to the individual. The suspect then came out of the house and put down his weapon.

Deputy Gallagher is recognized for preventing what could have been a tragic situation.

Sheriff Gary W. Howard commented, “Deputy Gallagher gained the individual’s confidence and convinced him not to hurt himself,” adding, “He did an excellent job.”

Sheriff Howard also shared that Deputy Gallagher has since been promoted to Road Patrol Sergeant, filling an open position.