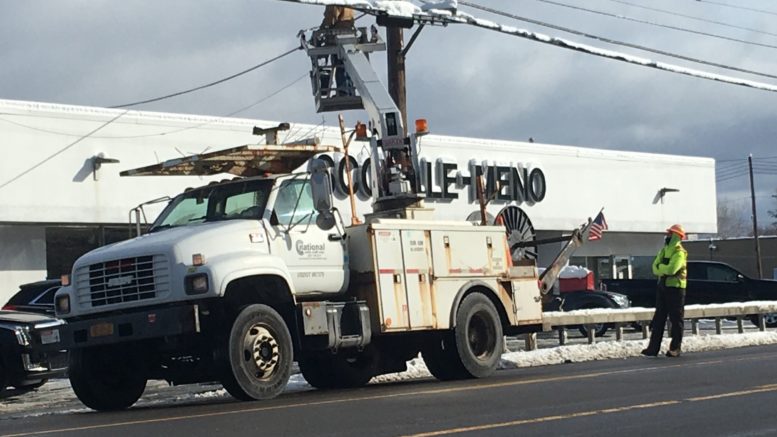 Crews were still working last Tuesday to repair power lines and deal with the ice left behind. (Photo by Wendy Post)

Despite having to deal with a quarter inch sheet of ice residing under close to 10 inches of snow, Village of Owego officials say they are pleased with how the Department of Public Works maintained the roads during the winter storm last week.

DPW Superintendent Jeff Soules said that about six trucks were already out clearing roads starting at 9 p.m. last Sunday and kept at it all through Monday.

“Our fleet is fairly new, everything went good and we didn’t break anything for a change,” Soules said.

Soules said that while the trucks for the most part come through storms unscathed, the actual plowing equipment does break from time to time.

“You can’t see what’s under the snow and the trucks take a pretty good beating, plows break and more. But nothing major ever happens,” Soules said.

Despite not yet tabulating the final cost of the storm Soules said that the cost would be in the thousands of dollars.

“Which is in line with what you would expect for a winter storm,” Soules said.

After the storm, Soules said he estimates roughly 500,000 pounds of salt are still in reserve.

“I’m sure we’ll end up ordering more salt at some point this winter, but that’s all part of the budget, my gut feeling is I think it’s going to be like the winters were 20 years ago, or a little worse than usual for what we get now,” Soules added.

Mayor Mike Baratta said he was happy with how the storm clean up went, singling out all the crews at DPW for praise.

“I think we handled it pretty well; we obviously had people come in Sunday and work, and luckily it snowed a lot during the day Monday when people were actually supposed to be at work. All in all I would say the DPW did a good job and the roads are looking pretty good,” Baratta said.

Throughout the two-day storm, which blanketed the Northeast Region, multiple accidents were reported as the ice, which came early on, proved to be problematic. Last Sunday, the Tioga County Sheriff’s office issued a travel advisory that remained in effect until Tuesday, urging residents to use caution if they had to travel. Village officials issued a travel advisory as well.

At the onset of the storm last Sunday, State Route 17 was backed up because of black ice and as a result, Route 17C (westbound) in the town of Nichols was closed, and traffic was rerouted at Exit 62 to allow crews to salt the highway.

As for power outages, most likely due to the ice and the weight of the snow, NYSEG reported during the storm, and as of last Tuesday, that 88 remained without power in Tioga County, although that number appeared higher in surrounding counties.