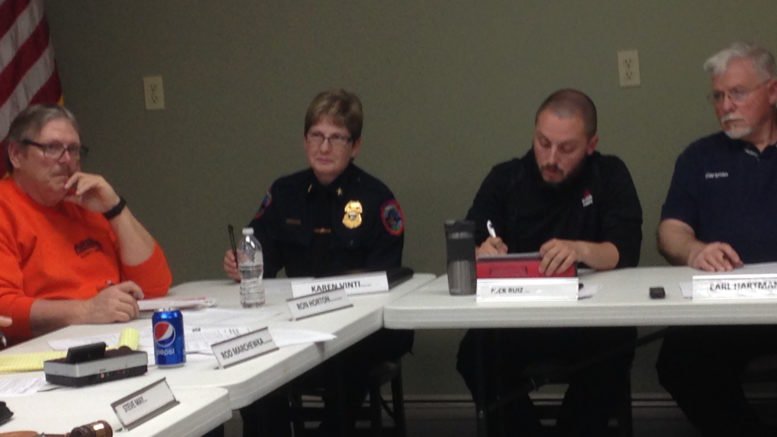 Owego Police Chief Karen Vinti listens to board members discuss the police department at last Monday’s Village of Owego Board Meeting. On Friday, and just four days following the board meeting, Chief Vinti announced she will retire. Next to Karen, on the right, are newly elected board member Nicholas Ruiz and then Earl Hartman, deputy mayor and board member. To her left is Ron Horton, who is in charge of the sewer department. Horton will be retiring, and an agenda item on Monday authorized solicitation to fill his position. (Photo by Wendy Post)

There was a full house at last Monday’s Village of Owego board meeting as the finances of the village were brought to light, and were the driving force behind over a half dozen items that were listed on the agenda to include reducing the police chief’s hours and the grant acquired by the village to explore dissolving or consolidating the Owego Police Department.

And in the days following the meeting, Owego Police Chief Karen Vinti announced that she would retire following this year’s Strawberry Festival in June. You can look for more on this in next week’s edition of the Pennysaver Press.

As for the police department talks, an agenda item at Monday’s meeting concerned the consolidation grant, previously awarded to the village, that may see its time expire due to the village’s inability to negotiate agreements with the Police Benevolent Association (PBA).

One of the police department officers read a letter from the PBA that cited the village’s inability to produce documents to New York State regarding its finances as the reason that the board should not make a decision on consolidation or dissolution. The officer stated that their economist viewed the village as in a good financial state.

Mayor May did note, following this meeting, that the village does not have these numbers yet as the Village audits are still ongoing and are not complete.

The grant’s study proposed that the Owego Police Department be dissolved and that the Tioga County Sheriff’s Department provide coverage of the village policing. The officers remaining on the police force would be offered training and a position with the sheriff’s department if the dissolution were negotiated.

There were community residents present at the meeting that are opposed to the dissolution of the village’s police force.

One of those is Phoebe Morris, former trustee. Morris stated that the police are not being given the resources needed to do their job.

“You are not supplying this department with what they need to do their job,” said Morris, hinting that the village police are being set up for failure.

The Owego Police Chief, Karen Vinti, stated that she was never kept informed about the process of the grant.

She added, “It seems to me that the village is trying to make the PBA look as though they are uncooperative about the negotiations. When the PBA met with them they indicated they were waiting for all the financials to come in.”

Because of the village’s financial state, other agenda items that included an annual estimate of taxes, changing the clerk / treasurer position from elected to appointed and whether to split this into two positions, creating a position on the civil service list for a part-time chief of police, dissolving the village court, and other items related to the village finances were discussed.

As for dissolving the Village court, the board noted that if dissolved, effective April 1, 2018, there would be a savings of approximately $35,000 per year. The dissolution of the court, however, is subject to permissive referendum.

As for the part time police chief position being posted on the civil service listing, Police Chief Karen Vinti stated that she did not know anything about this agenda item.

“I did not know about the part time position,” stated Chief Vinti, adding, “I found out on Friday evening while checking my mail and saw the agenda.”

Chief Vinti stated that with the few officers she has now, she is already covering shifts and that a part time chief would make things worse.

“I am budgeted for six full time officers and I currently have four. Those numbers include me, so to cut me to part time seems ridiculous,” said Chief Vinti. These comments came prior to her decision to retire.

There was also a presentation, at the meeting, by Ike Lovelass, owner of the Owego Kitchen. Lovelass presented to the board that the Owego Kitchen has outgrown its current location on Lake Street, and that they (the owners) would like to learn more about purchasing the Central Fire Station in Owego to utilize for their business.

Earl Hartman, trustee, noted for the record that selling the Central Fire Station for this use was not the board’s idea. Lovelass, however, noted that talks of using the station were with Economic Development in Tioga County.

Mayor May, following the meeting, stated, “The Village Trustees were not aware of the interest of Ike Loveless’ interest in Central Station. The Village did not initiate Ike’s interest.”

Lovelass stated that finding out if it was for sale and what the price would be was their purpose for coming to the meeting.

Other items discussed at the meeting were from Leonard Hilldale, owner of Save More Furniture in Owego. Hilldale plans to transform his Elm Street location into art space and a state of the art theater, and was informing the village board that he would be applying for a liquor license for the site.

Also presenting were Andrew Hafer and Nancy Eckstrom on behalf of the Summer Food Service Program, which is federally funded. Hafer and Eckstrom requested permission to utilize Marvin Park for food distribution this summer.

The next Village of Owego Board Meeting will take place on May 1, at 7 p.m. at the Elm Street location.