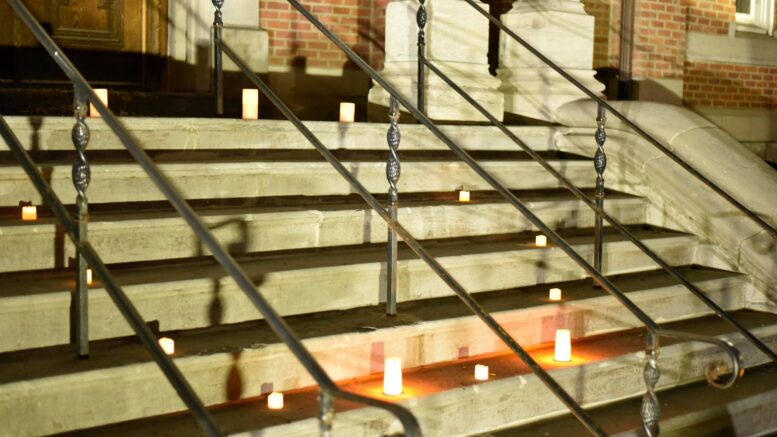 On Sept. 19, people across the country gathered in front of their local courthouses to mourn the passing of Supreme Court Justice Ruth Bader Ginsburg. Locally, a vigil was organized by Owego For Equality, and attended by about 40 people who honored Justice Ginsburg’s memory by sharing stories about her life and her legacy at the Courthouse Square in Owego.

According to one of the organizers, “The loss of such a monumental feminist icon felt especially tragic coming on the heels of Owego’s beautiful celebration of the women’s suffrage centennial, but the inspirational words shared by those at the vigil offered hope for the future.”

Despite these difficulties, Ginsburg went on to graduate from Cornell University in 1954 with an undergraduate degree in government, and then attended Harvard Law School.  When her husband accepted a job in New York City, Ginsburg transferred to Columbia Law School where she earned her law degree and tied for first in her class.

After graduating, Ginsburg encountered obstacles because of her gender. Many places did not want to hire a woman, and when she finally attained a position as a professor at Rutgers Law School in 1963, she was informed that she would be paid less than her male colleagues because her husband had a well-paying job.

She pushed back against such gender based inequality on all fronts throughout her life – not only by fighting for women’s rights, but also by fighting against discrimination towards men.

The case that initially propelled her to fame, however, was about men’s rights.  In Weinberger v. Wiesenfeld, Ruth Bader Ginsburg successfully argued to the Supreme Court that men, as widowers, should have the same Social Security survivors’ benefits that were made available to widows.

Her work earned her notoriety as a champion of equal rights and an icon of feminism. In 1993 she was nominated to the Supreme Court by Bill Clinton, and confirmed by the U.S. Senate in a 96–3 vote. She was only the second woman to be appointed, and she made her opinion on the imbalance perfectly clear, stating, “When I’m sometimes asked when will there be enough [women on the Supreme Court] and I say, ‘When there are nine,’ people are shocked. But there’d been nine men, and nobody’s ever raised a question about that.”

Her attitude and incredible dedication made her a beloved household name.  The number of people that attended her vigil in Owego, despite the short notice for the event, made it obvious that she was extremely important to so many in the community.

Those who gathered together mentioned Ginsburg’s admiration of Belva Lockwood and shared some of Ginsburg’s more famous quotes. Her advice to “fight for the things that you care about, but do it in a way that will lead others to join you” seems especially wise during these difficult, divisive times.

Stories are shared by organizers of last Saturday evening’s vigil, held on the courthouse steps in Owego and in honor of Justice Ruth Bader Ginsburg’s passing. Photo credit: Aaron Verity.

Her attitude towards setbacks and losing was also pragmatic: “Dissent speaks to a future age. It’s not simply to say, ‘my colleagues are wrong and I would do it this way,’ but the greatest dissents do become court opinions.”

At the vigil, local resident Irena Horvatt gave a speech that included this moving passage, “Justice Ruth Bader Ginsburg is gone from us now, but she never slowed down, and neither should we. We can honor her life by keeping her tradition of dissent and civic engagement alive. We can honor her legacy by continuing to care about causes that are important to us, and by making that care actionable in our daily lives.”

Justice Ruth Bader Ginsburg passed away at home on Sept. 18, 2020 from complications of pancreatic cancer. She wanted to be remembered “As someone who did whatever she could, with whatever limited talent she had, to move society along in the direction I would like it to be for my children and grandchildren.”