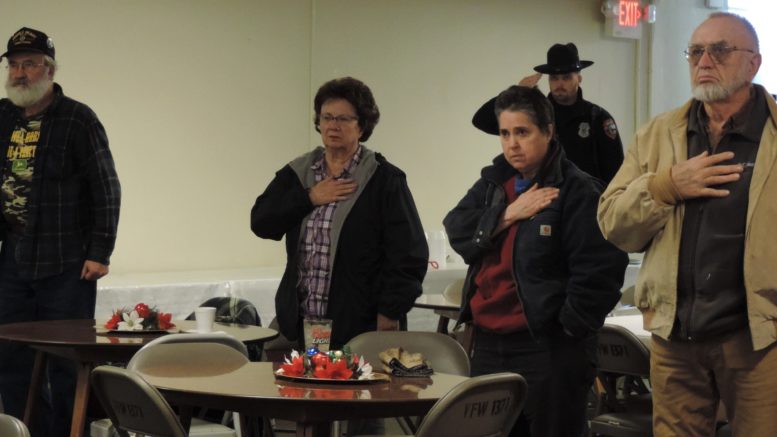 Pictured are veterans and guests who attended the annual Pearl Harbor Remembrance ceremony, held on Dec. 7 at V.F.W. Post 1371 in Owego. (Photo by JoAnn R. Walter)

Several veterans, families, and other members of the public attended the annual Pearl Harbor Remembrance Day ceremony held on Dec. 7 at the Glenn A. Warner V.F.W. Post 1371 in Owego.

This year marks the 78th anniversary of the attack on Pearl Harbor, Hawaii, and where more than 2,400 soldiers and civilians lost their lives, and over 1,000 people were injured. Several American naval vessels and battleships were struck, and over 300 airplanes were lost. The surprise attack led to the U.S. declaring war on Japan and entering World War II.

Jim Raftis, Sr., Korean War veteran and Memorial Day chairman, remarked that the day is set aside to, “Remember those who served our country so valiantly, and to help us to always remember that their sacrifices were not in vain.”

On behalf of the Post and auxiliary, Commander Lawrence Osorio thanked those in attendance, and commented, “This is an important day to remember in American history.”

Tioga County Legislator, Bill Standinger, read a proclamation that included, in part, “Reflecting on the loss of human life and the ruination of the Pearl Harbor base that day serves as a stark reminder of the exceptional service and selfless sacrifice of our armed forces, who risked their lives and personal safety to shield our nation from harm and preserve our nation’s founding values and liberties.”

A moment of silence was offered at the ceremony in honor of Seaman Delmar Dale Sibley, Tioga County’s first casualty, who lost his life while serving aboard the USS Arizona.

Raftis pointed out Sibley’s portrait, which hangs on the wall inside the V.F.W. dining hall, along with a shadow box of medals. Raftis learned via Sibley’s family that young Sibley enjoyed going to movies at the Tioga Theater, attended the nearby Methodist Church, and worked at Endicott Johnson until October 1940.  Sibley lost his life at age 23, and only 23 days before his 24th birthday.

Raftis called upon family members to speak about their loved ones who served at Pearl Harbor.

Jody Tatich, daughter of Richard Hopkins, shared that her father was not on duty the morning of the attack and was allowed to sleep in where he was stationed at Schofield Barracks.

Jody shared, “Dad didn’t talk a lot when I was growing up, but he mentioned the confusion and chaos during and after the attacks,” and added, “Dad belonged to the Pearl Harbor Survivors Association, and he was especially proud of his grandsons who served in Iraq and Afghanistan.”

Hopkins received the Bronze Star for his service on the front lines at Guadalcanal.

Donald Stocks jumped from his kitchen duty as a cook at Hickam Field to join in on the fighting. Three of Stocks’ eight children attended the ceremony.

Linda Hyatt, Stocks’ daughter, remarked, “Dad didn’t talk much about it,” and shared one amusing tidbit, “Dad told us that he had to carry a stove with him (on the day of the attack) because the Captain had to have his coffee.”

Bill Kennedy was stationed at Hickam Field in the Army Air Corps. Kennedy braved the chaos to check on the status of planes, and grabbed his camera at the last second, which produced many compelling images.

Kennedy’s step-daughter, Amy Anthony, shared that Kennedy enjoyed researching Pearl Harbor history in the last 15 years of his life, and added, “He returned to Pearl Harbor twice to visit.“

Also remembered was Lester Dunham, who, in addition to Pearl Harbor, fought at Midway, Iwo Jima, and Guadalcanal.

Attending the ceremony were Roseann and Roger Brame, a Vietnam veteran, from Berkshire. The couple shared, “We came to honor and remember those who died.”

V.F.W. member and Vietnam veteran Dean Morgan shared that he and two other local veterans were invited to speak at the Family Enrichment Network’s Head Start class shortly after Veteran’s Day, which included a real Purple Heart show-and-tell.

The Head Start class sent the veterans a thank-you card and flag poster.

Morgan said, “It was touching, and nice of the students of that age to honor us and thank us for our service.”

Since the students cannot fully read or write, the thank you card included 14 thumbprints with their first names. The flag consisted of palm prints in red and blue.

Be the first to comment on "Pearl Harbor anniversary remembered "