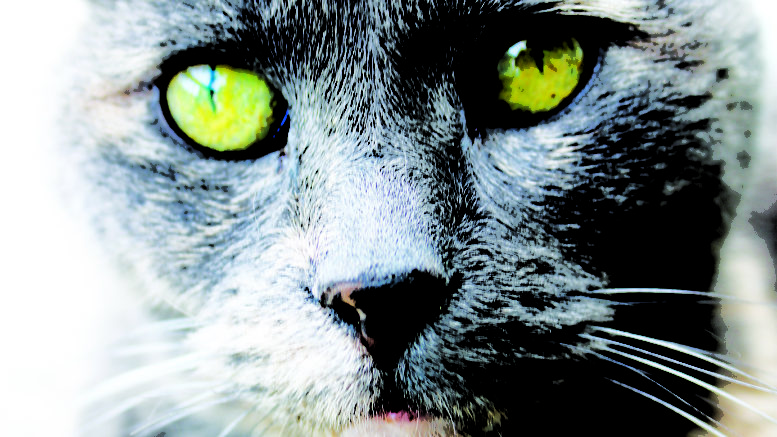 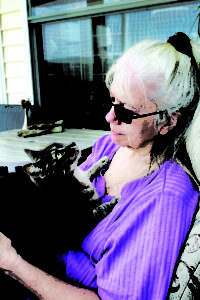 Diana Oliver of Gemini Farm in Windham holds her cat Bully, one of about 50 at the animal sanctuary. For more information on the farm, visit www.geminifarmromepa.net. She welcomes donations and volunteers. Photo credit: Nancy Sharer.

The sun bathes his fur. He lies soaking it in, eyes shut, head resting on the floor and front leg stretched out. Ahhh – life is good.

It’s good for him and the other cats on the farm here in Windham. They have a home, they have happiness – and they have love.

“I think the thing that I like about cats is – there’s something calming about the purr of a cat,” Diana Oliver said. Cats make you feel special, too, because they choose you.

Oliver runs Gemini Farm in Windham, a sanctuary for animals, especially cats. It’s a peaceful place, with flowers out front and a back yard looking over the hills. Here, dogs, cats, horses and more can eat, run, play and be themselves. And maybe they’ll find new homes, too.

Or maybe not. That’s okay. Oliver will take care of them.

Oliver has been involved with animals, and animal rescue, for many years. It’s more than a job. It’s her passion.

“My father and my mother liked animals,” she recalled of her childhood in Binghamton, N.Y. She wanted a horse. Her parents told her she could have all the animals she wanted, when she grew up. They thought she’d live on a farm with just a couple critters. “And that wasn’t it,” she exclaimed.

As an adult she ran a quarter horse farm in southern Pennsylvania. Later, she taught animal science – grooming, kennel management, vet tech work and so on – for 30 years at BOCES in Binghamton.

“My career was animals and my hobbies were animals!”

In the 1970s she started doing animal rescue, for horses, dogs and goats. “Back then rescue wasn’t a big thing,” she said. She tried miniature and thoroughbred horse breeding but found the racehorses faced poor futures if they didn’t succeed. The miniatures were a novelty, she said, and suffered with the same dilemma. She phased out those specialties and kept the little horses. 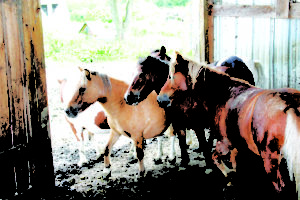 Gemini Farm also offers a sanctuary for other kinds of animals, such as miniature horses, and goats, dogs and geese. Photo credit: Nancy Sharer.

In 1986, she moved to Windham. “I’ve been rescuing farm animals since probably the late eighties or early nineties,” she explained. “And then basically we realized that these animals really didn’t have a place to go.” So, she focused on offering a sanctuary.

Farm animals are harder work, though, and Oliver has reached her early 70s. So today she’s no longer adding them but instead focusing largely on cats. “I’ve always done cat rescue,” she noted.

“There are literally thousands of cats out there that are never going to get a home. To me they’re very special,” she said.

She’s partnered with Paws and Claws Society Inc. in Thorofare, New Jersey. Oliver shares Internet information on the 501c3 volunteer charity: “For 25 years,” it says, “PACS has shared its vision to humanely improve the quality of life for animals with groups and individuals wishing to help animals in their local communities. Thanks to the efforts of Paws and Claws Society, Cape May County became the first no-kill county in the state of New Jersey, and Cape May County was not PACS’s first no-kill success. PACS is currently working its magic in several communities bordering New York and Pennsylvania. Since October 2015, Paws and Claws Society has partnered with Gemini Farm to offer PACS SAFER Cats on the Border program in Rome and Warren townships, Pa., as well as Nichols, Barton and Waverly, N.Y.”

Oliver and PACS believe spaying/neutering is the solution to animal overpopulation. But too many animal owners don’t do it. So, Gemini uses the PACS spay/neuter program for wild, stray and barn cats.

If, for example, a farmer reports cats have been dropped at his barn, Gemini will pick them up. (Two trappers help with this.) They take them to a vet, where they are spayed or neutered, tested for feline leukemia, vaccinated for rabies and distemper, and treated for any parasites they have. 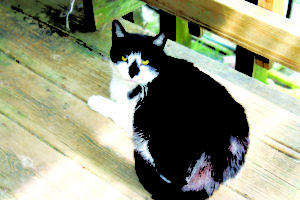 A cat relaxes on the back porch at Diana Oliver’s home. Photo credit: Nancy Sharer.

Gemini offers its services to anyone paying property taxes in Rome or Nichols, or anyone in a home whose owners pays taxes there. Four foster homes help Oliver care for cats that might need some recuperation time after spaying/neutering or other surgeries before being adopted.

Gemini also has partnered with Cape Atlantic Cats in Ocean City, New Jersey, and sometimes sends kittens there to be adopted. It also offers cats for adoption straight from the Windham farm.

“We believe that we are all in this together,” Oliver said of the different groups. For example, consider Peach. A friend of a PACS board member wanted a certain kind of cat for another friend, but at first no one could find one. Finally, she found a picture of Peach at the Chemung Humane Society and SPCA Inc., way up in Elmira, N.Y. PACS contacted Oliver, who made arrangements with one of her foster home people who drove Peach from Elmira all the way to Ocean City.

As a rooster crowed outdoors, Oliver reported she has eight miniature horses and donkeys, eight geese, eight sheep, chickens, five dogs – besides the 50 cats. The horses, donkeys, sheep and goats have sheds and pastures, while the others are free to roam the farm, with cats and dogs also allowed in the house. Oliver has cat feeding station indoors and outdoors.

She offered a tour. A sunroom holds cages, like one for a cat that had leg surgery and a mother nursing her kittens. The back porch holds chairs, a lounger, flowerpots – and cats.

Oliver grows more flowers and some vegetables in the back yard, including kale for the geese. Sheds house goats, such as Rhubarb, and miniature horses, including Sparrow, who lives with Benny the donkey. Geese with orange bills and gray feathers strutted around the lawn. “Sheep! Sheep!” Oliver called. A little flock hurried around a corner to see her.

She shows a new project, a heated room in another shed for wild cats to use in the winter. Just needs a coat of paint and there you’ll have it – a feral feline flat! The room next to it will hold toys, and a fenced yard outside will keep them from wandering off and getting hurt.

Oliver introduces or tells about the cats: There’s Sunshine, who’s 18 now, and Bruce. “He just arrived one day!” And Phyllis, one of ten kittens discovered on a load of construction material from Philadelphia brought to Binghamton. “And so Phyllis came to me and I bottle-fed her.”

Dapper Dan was a stray at the Dandy Mini Mart in Rome. Someone shot his leg off. And you have Denny and Joey and Kyle, all found abandoned in a park, and Melody, the Persian. And Floyd From the Flood (of 2011).

“We think that she was dumped off from a van,” Oliver explained about Vanna’s name. Vanna gave birth to Ranger, also named after a vehicle.

And there’s Bully (not really one). Tinkerbell. And Rat Breath.

Roly Poly and three other kittens were found abandoned “in the middle of one of the coldest winters we’ve ever had.”

Roly Poly shows how cruel some people are. “They’re God’s creatures too, and I don’t understand how people can turn their back on a suffering animal or a suffering child!” Oliver declared.

Today, Roly Poly is getting old and has health problems. But she “still loves life,” Oliver said. Because she’s at Gemini.