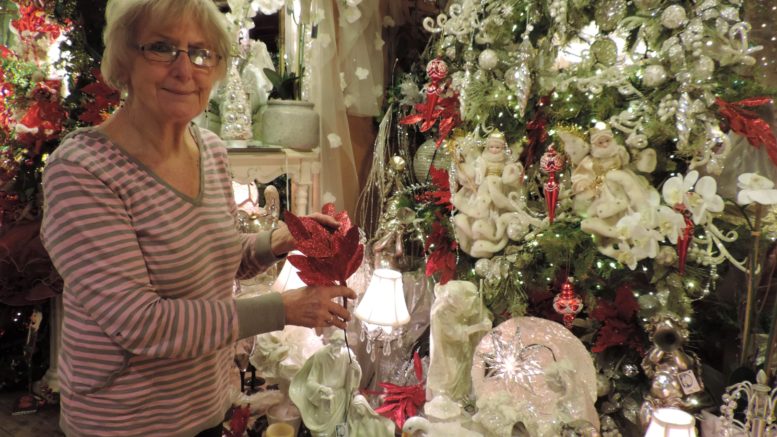 Pictured is Pat Hansen, owner of the Hand of Man in Owego, N.Y. After 45 years, Hansen has announced she is retiring and is in the process of closing her store. (Photo by JoAnn R. Walter)

The Hand of Man, located at 180 Front St. in Owego, N.Y. is set to close its doors soon, and after serving the community for 45 years.

Pat Hansen, owner of the beloved store that has graced the historic downtown Owego landscape since the 1970’s, is now in her 80’s and has decided to retire.

The closing, Hansen remarked, is, “Bittersweet, and I will miss it terribly.”

Hansen is pleased, though, that a new owner has sights set on maintaining the integrity of the property while establishing a new business. Hansen recently signed the formal documents to transfer ownership, and the official closing is scheduled in the spring of 2020.

Hand of Man will occupy the building through the end of April, and where, by that time, Hansen’s merchandise and equipment will have been sold and cleared out. River Rose Café, a quintessential part of Hand of Man’s legacy, will close at the end of December.

Local businessman, Adam Weitsman, is purchasing the 180 Front St. property, a prime piece that sits near the north end of the Court Street Bridge and overlooks the Susquehanna River.  It is Weitsman’s intention to open a sushi restaurant, and also utilize the vacant lot adjacent to 180 Front St., and which he has owned for over a decade.

Hansen first became involved in the property in the early 1970’s and purchased it in 1973.

“I bought it to save it, so that it couldn’t be torn down,” Hansen remarked, and further explained that those efforts marked a pathway for an early Riverow Restoration Group that has since become the Historic Owego Marketplace.

Hansen commented that the original use of the building housed a farmers market of sorts, and where individual sellers rented booths to sell fresh produce and farm items, baked goods, and cleaning products and antiques, just to name a few.

Interestingly, opening the Hand of Man wasn’t in Hansen’s plans, but realizing there was a need, it all just came together. In turn, the popular store set the stage for other businesses to follow in the village.

Hand of Man has delighted generations of customers year-round. In fact, Hansen said that today she welcomes fourth generation customers to her store, and further commented that Hand of Man became, in its own way, a distinct tourist destination.

Walk through the front door, and you are immediately whisked into the world of Christmas! The fragrant scents and bright colors of merchandise envelop you amongst an endless menagerie of holiday-themed items. As you weave through the store, you also cannot miss the appetizing smells coming from River Rose Café.

Next year, 2020, marks the 40th year for the Owego Strawberry Festival, an event that Hansen has played a major role in organizing. The festival, held each year in June, and what Hansen described as a “glorified sidewalk sale” in its infancy, has blossomed into one of the largest events in all of New York State.

“It’s amazing, too, how everyone has come together to make it such a great event,” Hansen said.

Our own editor, Wendy Post, joined efforts with Hansen a few years back in organizing this annual event – an event that continues to grow. According to Post, she has volunteered her time to organize the festival because of its draw to Owego, and because of Pat Hansen.

“Pat has been great to work with over the years in the planning of the festival,” said Post, adding, “It’s a challenge to organize something that large, but Pat has done it for so long that it is second nature.”

“She is a beautiful person, inside and out, and we are both excited to be organizing things again for next year’s festival,” Post added, noting that Hansen will appropriately serve as Parade Marshall for the 2020 festival, set for June 12 and 13 next year.

As for the Hand of Man, it will remain a fond memory for many, and Hansen’s contributions to Owego will always be remembered as a positive influence, and all of which stemmed from a strong desire to save a worthy property.

Hansen is appreciative to everyone who has supported her, and remarked, “Thank you to all who have stopped in the store.”

Most merchandise is discounted by 50 percent, unless otherwise marked. For additional information, visit the Hand of Man and River Rose Café on Facebook, or call (607) 687-2556.