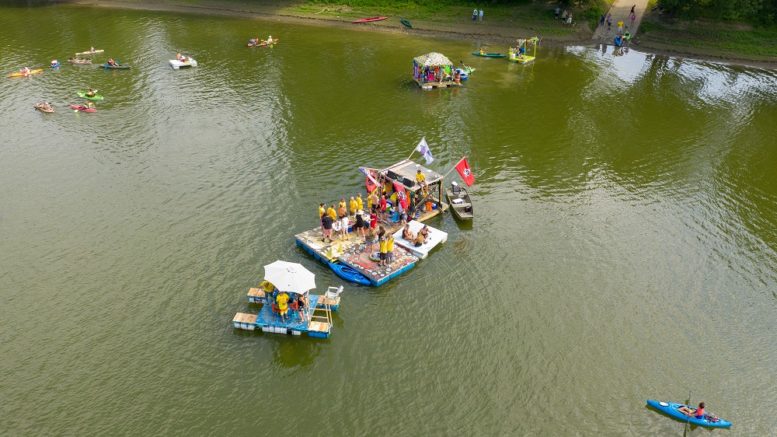 A view from up above right after the Rieger Regatta launched from Hickories Park in Owego. Drone photo by Bob Hoag.

In the true spirit of river rafting, the Annual Rieger Regatta is keeping the tradition alive in Owego, and along the Susquehanna. This year’s event launched off at Hickories Park in Owego on Saturday, Aug. 3.

Built with a nineties theme, this year’s party barge offered the usual amenities with slides, facilities, and a gathering spot for smaller watercraft to latch on to.

This year’s event welcomed river rafters, kayakers and homemade watercraft for the trek down the Susquehanna, which ended in Nichols, N.Y.

Lacee Jackson, Rieg’s sister and one of the event organizers, stated, “This is exactly why Jeff and I work so hard to keep the regatta going. Paying tribute to the original regatta.”

Jackson further explained that next year will be the 10th anniversary of the Rieger Regatta, and will be in honor of any one that has been a part of the regattas that has passed. Jackson herself will be designing a raft with photos of all of those who have passed and float it down the river in their honor.

Next year’s regatta is already set for Aug. 1, 2020. The event’s Captain, Jeff Rieg, hopes to keep this tradition alive on the river for years to come.

Be the first to comment on "Rieger Regatta continues its tradition"