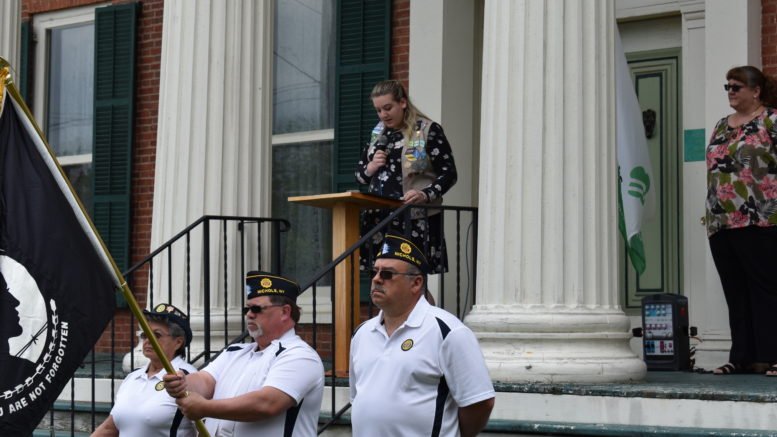 Veronica Ricketson, 16, of Girl Scout Troop 40993, speaks to a crowd at the Cady Library on Saturday, May 25, about her Girl Scout Gold Award project, Hometown Heroes, where she organized the creation and hanging of 20 banners throughout Nichols honoring veterans. (Photo by Jacob Elsbree)

Along the streets of Nichols, 20 banners celebrating veterans now adorn the telephone poles as a part of the Nichols Hometown Heroes project organized by Veronica Ricketson, 16, of Girl Scout Troop 40993.

On Saturday, May 25, Ricketson’s work was celebrated in a short presentation on the Cady Library lawn followed by a tour of the banners around the town of Nichols.

“It was really stressful, but it was worth it,” Ricketson said about the inevitable outreach, organization and production of the project.

The presentation at Cady Library held off the rain as Ricketson, her troop and Nichols Mayer Lesley Pelotte gave their remarks about the work Ricketson put into this project and what it means for the town. Pelotte said that in continuing this project she wants every single pole in Nichols to be decorated with at least one banner.

To start the project, she first needed approval from the Girl Scout Council, which was her first time pitching an idea. Once it was approved, the ball started rolling. She set herself a deadline and got to work reaching out to potential buyers in the community who would be interested in purchasing a banner.

Funny enough, she said, the outreach was not the most stressful part of the project. Instead, she said the “very lengthy process” of scanning each image and making the banner look exactly right was the hardest part for her.

But her work paid off. Each banner has a veteran’s name, branch of service, rank and years of service, underneath their service photograph.

After Saturday’s presentation, Michele Ricketson, Veronica’s mother and Troop 40993 leader, set the crowd of about 60 out into the town to find all of the banners, inviting them back to the American Legion for lunch.

“It feels nice knowing they are coming to honor the veterans and all the hard work I put into this project,” Veronica said.

Moving forward, the Nichols American Legion Post 1624 will be carrying on the project that Ricketson set in motion.

All 20 Hometown Heroes are scattered around Nichols on East and West River Road, South Main Street, Cady Avenue, and Taylor Street. Ricketson was speechless with a sense of fulfillment after leaving a physical mark on her town.

Be the first to comment on "Celebrating Hometown Heroes"