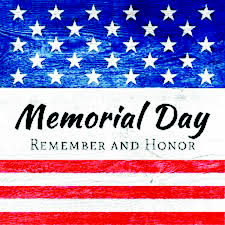 The solemn Memorial Day ceremony has not been cancelled locally, but the traditional Owego Memorial Day Parade and Services at the Tioga County Veterans Memorial will not take place due to the coronavirus pandemic. Instead, WEBO Radio will live stream events on Monday, May 25.

Remember the real reason behind the holiday. Honor those who have fought for the freedoms we enjoy today, and try to be respectful of their sacrifice all weekend long. Our American flag does not fly because the wind moves it. It flies with the last breath of each soldier who died protecting it.

On a morning when so many would normally be packing their things to head out for the parade, veterans hope the community will take time at home for quiet reflection and appreciation to honor the sacrifice of those who never came home. Veterans say they do not want people to gather, but they do want people to remember. This can be an excellent time to talk to your children about the meaning of Memorial Day.

This decision was very difficult. Not an easy choice, but one that needed to be made. Call it a “pause” in the tradition. It’s done for the safety of others.

To hold a ceremony, while socially distant, WEBO Radio will put together a live stream on their Facebook Page for the reading of the names by Mary Beth Jones and JoAnn Walter at 8:15 a.m. They will be reading the names of veterans buried in some of the 68 cemeteries from a 2008 cemetery survey by Chet and Anita Harding.

Then at 10 a.m., for the 55th year, Jim Raftis will host the traditional Service of Remembrance for Tioga County’s Fallen Heroes – the purpose of Memorial Day. It’s a two-part memorial and can be heard on-air at WEBO.

First, remembering veterans killed in action and those who served but were wounded in combat and came home to resume life with their families.

Two examples: An Owego survivor of the Bataan Death March is one of the 17,206 graves in the largest cemetery in Manila, Philippines, for U.S. personnel killed during WWII. In the Netherlands American Cemetery in Margraten, Netherlands, among the 8,290 American war dead are four Tioga County WWII Fallen Heroes including Army Pfc. Glenn A. Warner who has Owego VFW Post 1371 named in his honor.

Tioga County Veterans Service Director Michael Middaugh is compiling a Last Roll Call with the names of Tioga County veterans who have passed since last Veterans Day called out.

Proud Army Mom and Gold Star Mother Barbara Bilbrey will reflect on her visits to the Army base at Fort Stewart, Ga., where her son, Iraq Fallen Hero Charles Bilbrey Jr. trained. Family members of fallen soldiers place special wreaths at the Warriors Walk. She’ll also tell what it means to place an American flag at her son’s grave in St. Patrick’s Cemetery as she leads the St. Patrick’s / Blessed Trinity Youth Group for “Flags In” on all veterans graves.

Veterans will sincerely miss the Owego Elementary students carrying a small American flag in the parade and presenting it to a veteran at the Tioga County Veterans Memorial. Importance of the flags – each flag remembered one of Tioga County’s Fallen Heroes.

Grave Flag Coordinator Tom Simon has packaged all grave flags and is holding them at Tioga Post 401 American Legion until the green light is given for distribution. “Flags In” details are working on their schedules for placement of the 2,000-plus grave flags in cemeteries in Eastern and Northern Tioga County Cemeteries.

Right now veterans say they can’t have mass flag placements at grave sites to maintain social distancing. It’s also important to protect the Boy Scouts, veterans and others until clearance is received from State and Tioga County officials. The “Flags In” decision will be revisited in June. Nationally, there will be no flag placements either at the 141 Veterans National Cemeteries.

In keeping with current precaution measures to prevent the spread of COVID-19, all American Battle Monuments Commission (ABMC) cemeteries are closed until further notice.

That means that Erwin Flohr, of Helmond, Netherlands, for the first time will be unable to personally visit and decorate the graves of six Tioga County WWII Fallen Heroes – four in Margraten and two in Henri-Chappelle in Belgium.

This Memorial Day, as we continue to honor those who fell for us in battle, let’s also pause to remember those who have also sacrificed their lives while serving others during the COVID-19 pandemic.

May God Bless them and May God bless you for remembering them.

Be the first to comment on "Memorial Day Tradition ‘on pause’"