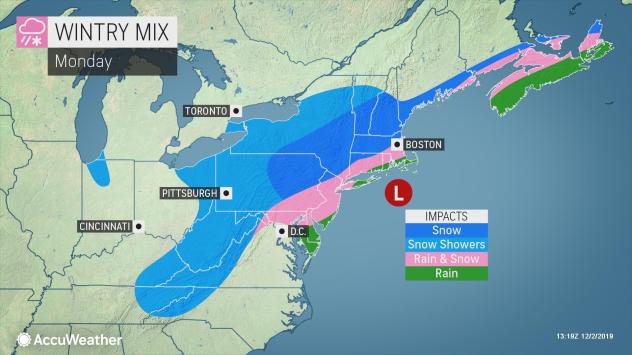 A snapshot of today's continuing weather, as things begin to taper off. Credit: Accuweather.com.

(Accuweather.com) – As colder air sweeps toward the coast, a change to snow will lead to slippery conditions from Philadelphia to New York City and Boston into Monday night, while snow piles up over the interior Northeast.

Up through Sunday night, most of the snow, ice and rain produced throughout the Northeast was from an older storm that first blasted the Midwest over the weekend. Now, a new storm will strengthen along the coast, cranking out more snow across the interior and cause accumulating snow in areas along Interstate 95 where rain was falling at the start of Monday.

Winter storm warnings were in effect from the southern Appalachians to Maine on Monday morning.

The transition to accumulating snow can happen quickly with roads transitioning from wet to slushy to snow-covered in a matter of minutes in some cases. Motorists should be prepared for a slippery and difficult drive home Monday afternoon and evening, according to AccuWeather meteorologists.

“The worst conditions for the Monday evening rush hour may be around New York City given when and where the coastal storm ramps up,” AccuWeather Senior Meteorologist Brett Anderson said.

The travel difficulty won’t stop at the Monday evening commute. Snow is expected to come down hard for several hours Monday night.

Enough snow to shovel and plow is forecast for the northern and western suburbs of Philadelphia and New York City. The same is foreseen within the cities of Hartford, Connecticut, and Boston.

In the city of Boston and points on eastward to Cape Cod, Massachusetts, the worst drive may be during Tuesday morning’s rush hour.

A general 1-2 feet of snow is in store for this swath with an AccuWeather Local StormMax™ of 30 inches in the mountains over this swath.

Cities that have the potential to receive a storm total of 2 feet of snow include Albany and Kingston, New York; Bennington, Vermont; Keene and Manchester, New Hampshire; and Worcester and Pittsfield, Massachusetts.

Meanwhile, the old part of the storm system will continue to produce snow showers from western New York and western and central Pennsylvania southward to central and eastern Tennessee and western North Carolina into Monday night.