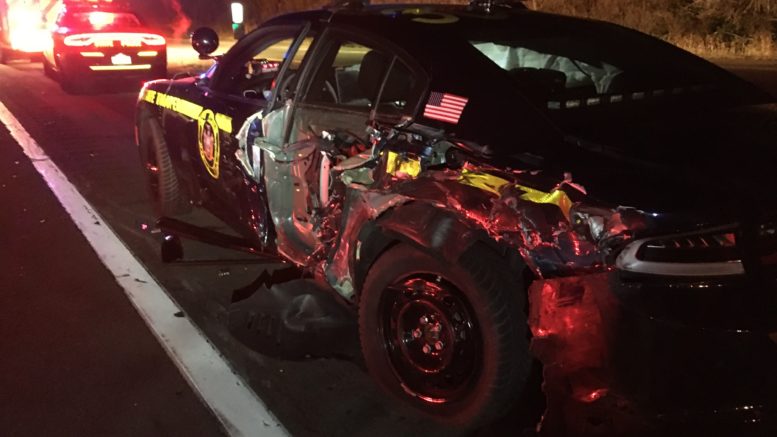 A New York State Police patrol vehicle with a 23-year veteran inside was struck by a tractor-trailer Tuesday night. The driver of the tractor-trailer, 35-year-old Darvi L. Moreland of Orange Park, Fla., was arrested for Driving While Intoxicated. The trooper suffered minor injuries.

According to police, at approximately 7:28 p.m. on Nov. 19, a trooper had just issued a traffic ticket to a vehicle on State Route 17 in the town of Nichols, N.Y. The trooper stepped inside his marked patrol vehicle and was waiting for the vehicle that he had stopped to pull out into traffic safely when a tractor trailer struck him from behind, shearing off most of the driver’s side of the 2019 Dodge Charger. The tractor-trailer did not stop and continued eastbound.

Troopers immediately issued a “Be on the Look Out” (BOLO) over Tioga County 911 and officers from Owego Police Department and Tioga County Sheriff’s Deputies quickly set up on State Route 17 in an attempt to locate and stop the vehicle.

A New York State Police Investigator spotted a tractor-trailer with passenger side damage and a flat tire on State Route 17 and with the assistance of a Tioga County Sheriff’s Deputy initiated a traffic stop near exit 64 in Owego.

The driver of the tractor-trailer was interviewed and subsequently failed Standardized Field Sobriety Tests. He was arrested and charged with DWI and issued several vehicle and traffic tickets. Moreland was arraigned in the town of Owego court and remanded to the Tioga County Jail.

The trooper was transported to Lourdes Hospital, treated and released.

Be the first to comment on "Truck driver strikes state police vehicle, arrested for DWI"